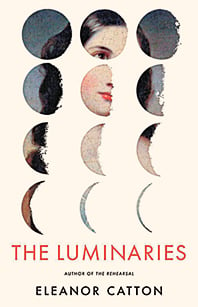 A young man and woman stand on the deck of a steamer as it approaches the Otago peninsula of southern New Zealand, watching a flock of albatross. The man describes the birds as mythical, ominous; the woman remarks that they remind her of ships—weighted, regal, not buffeted by the wind. “I should like to see him in a storm,” she says of one that repeatedly circles the ship.

Somewhere in the neighbourhood of 600 pages lead up to this rare romantic scene in Catton’s second novel, but do not be deterred; if anything, the nearly 300,000 words that comprise this beautifully rendered tale will leave you wanting more. The story opens in January 1866, in a hotel in a tiny prospecting town called Hokitika, where 12 men have gathered for a secret council. The reason for their assembly is slowly—tantalizingly—revealed to an uninvited guest.

There is also a “meta” mystery at work here—the link between such an accomplished work of literary fiction and . . . the zodiac. Each of the 12 men at the council represents a star sign; eight other characters stand for planets; and the names of most chapters refer to the heavenly drama concurrent with the plot—Mars in Capricorn, Mercury Sets. Catton, who is Canadian-born (and, at 27, the youngest author ever to be shortlisted for the Booker), actually consulted the charts of the day in crafting her story. She also made each section of the book—12 in all—half the length of the one that precedes it, so that, on the last page, a cycle is completed, not only narratively but physically. The effect is that everything bound up between the two covers feels destined, momentous. An exquisite world unto itself.