Review: The Malice of Fortune 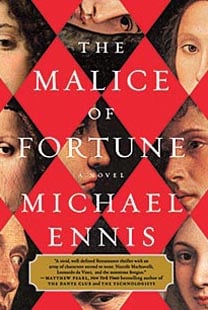 Fictionalizing historical figures is a tricky business. With audience expectations high, the tone can switch from delight to skepticism with just a few ham-fisted character development choices. It’s the difference between Tracy Chevalier’s Vermeer in Girl with a Pearl Earring and America’s 16th president in Abraham Lincoln, Vampire Hunter. It’s delicate work.

The Malice of Fortune opens with Pope Alexander VI (the Borgia one) convincing Damiata, his son’s favourite courtesan, to track down his son’s murderer. She soon teams up with Leonardo da Vinci and Niccolo Machiavelli. Oh yes, you read that correctly: the crime fighting dream team of reasonable scientist and ambitious philosopher is the Cagney and Lacey of Renaissance Italy.

The research necessary to construct the detailed world in which these events take place must have been enormous. When Ennis gracefully balances the cadence of his prose with his knack for historical detail, the reader can feel transported: the frescoes are clear in your mind’s eye, and you can smell the elaborate banquets. But often the author’s desire to showcase rhetoric muddles the story arc. And with a complex plot such as this one, rhythm and pace must be paramount lest the reader drown in an avalanche of tropes.

The book has all the elements of a murder mystery page-turner: serial murderer, political power plays, sexy courtesan and two maestros-cum-sleuths. One gets the feeling Ennis wrote Malice with a silver screen translation in mind. And, honestly, having geniuses da Vinci and Machiavelli partner to catch a baddie really does smell like a blockbuster.

The Malice of Fortune attempts to mimic the style of Umberto Eco’s The Name of the Rose but lands somewhere in the territory of a convoluted Da Vinci Code with a better vocabulary. But maybe he’s just getting warmed up—Ennis shows hints of greatness here.