The megascandal that almost wasn't

Book review: 'Hack Attack: The Inside Story of How the Truth Caught Up with Rupert Murdoch' 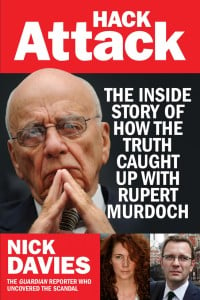 HACK ATTACK: THE INSIDE STORY OF HOW THE TRUTH CAUGHT UP WITH RUPERT MURDOCH

It was the scandal that nearly wasn’t. In 2007, a British private investigator and an editor at News of the World went to prison for illegally listening to voicemail messages of royal officials. An executive at Rupert Murdoch’s News Corp., which owned the tabloid, said a “full, rigorous internal inquiry” revealed that illegality was confined to that one journalist. The Press Complaints Commission said the same, while London’s Metropolitan Police boxed up mountains of documents from the investigator and ended its investigation.

The phone-hacking scandal could have died there, but for the digging of Nick Davies, an investigative journalist for the left-leaning Guardian newspaper. What he uncovered was an incestuous world of newspapers willing to do anything to push sales, investigators paid to hack into phones on an industrial scale, and police bribed for information. Lots of people knew what was going on, but no one was going to break the golden egg.

The illegal scoops included David Beckham’s affair with his assistant, Sienna Miller’s relationship woes with Jude Law, and the revelation that the son of future prime minister Gordon Brown had cystic fibrosis. Anyone who caught a tabloid’s attention was a target. In Miller’s case, Murdoch’s firm downloaded 10,000 email messages and hacked into the phones of the actress, her mother, her assistants, publicists, romantic partners past and present, and those people’s partners.

In Davies’s entertaining and opinionated account—which can be as messy as the scandal itself, for those not up on British culture and celebrity life—he takes direct aim at Murdoch’s empire, which tried to bury the story. Yet, source by source, nugget by nugget, Davies revealed the extent of the corruption that included police so enmeshed in the media that some covered up blatant illegality. Finally, in July 2011, the simmering phone-hacking scandal exploded when Davies revealed News of the World had hacked into the phone of murdered schoolgirl Millie Dowler, as well as victims of terrorist bombings and relatives of dead soldiers. Public revulsion forced the Sunday behemoth to close. A huge inquiry laid bare the deceits. In June, Andy Coulson, a former editor of NotW and spin doctor for Prime Minister David Cameron, was convicted. He won’t be the last. Dozens of Fleet Street’s former stars await trial.