The migrant crisis: Warnings from the Holocaust 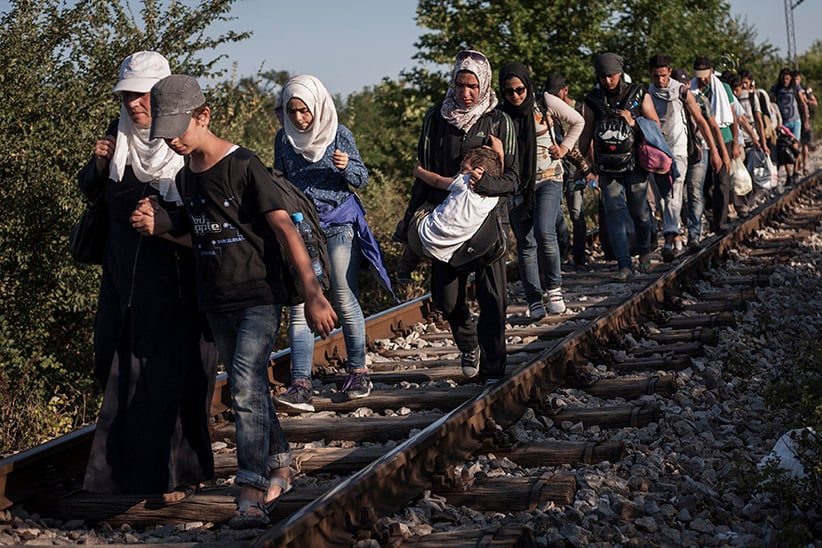 A group of refugees and migrants on their way to the Gevgelijas train station, minutes after they have crossed the Greek -Macedonian border. (Socrates Baltagianni/Invision/Redux)

American historian Timothy Snyder has a way with familiar historical moments—and they don’t come more familiar than the Holocaust—that turns them on their heads, just by the way he holds them to the light. In his latest work, Black Earth, he takes a well-known image—the sight of Jews, jeered by their fellow Viennese, being made to scrub their city’s sidewalks in the days after the Anschluss,  Austria’s forcible reunion with Nazi Germany in 1938—and asks a thought-provoking question: “Why were the Jews of Austria sent to Belarus, 1,000 km away, to be killed, when there was evident Jew hatred in Vienna?”

Why indeed? Snyder’s answer—captured in his subtitle: The Holocaust as History and Warning—offers, especially for North Americans, a very different look at how the Holocaust unfolded, and at what it should mean to us, seven decades later, in times that are as unsettled as the pre-war years. “Our story about the Holocaust,” he says in an interview with Maclean’s, “is of a slow, downward slope from anti-Semitic discrimination, to stigmatization, concentration camp and, ﬁnally, death. That’s not actually what happened.”

Snyder does much the same with an equally familiar statistic. The two million East European Jews who came under Soviet rule in 1939 and 1940 were the ﬁrst to be killed in large-scale Nazi massacres after the Germans went to war with the U.S.S.R. in 1941—that is to say, before the two million Jews who came under German rule in 1939 were murdered.  “Historians have to pay more attention to space,” says Snyder. “The Holocaust is almost always narrated inside Germany. I don’t do that. I narrate the Holocaust from the perspective of Jews where they happened to live, which was almost entirely outside Germany. Only about three per cent of Holocaust victims were German Jews.”

He makes a compelling case for what he calls his “double state destruction” thesis. When the Germans invaded the U.S.S.R., they also invaded lands under Soviet control: eastern Poland and the Baltic states. The Einsatzgruppen, the SS death squads, entered areas where the upper and middle classes—businessmen, clergy, professionals, many of them Jewish—had been killed by the tens of thousands, or deported to the Gulag by the hundreds of thousands over the previous two years. (Or set to be deported: When the Germans pushed into Latvia, some of the Siberia-bound trains hadn’t yet left, and the panicked Soviets shot their occupants.) Even in Russia, or, especially, famine-traumatized Ukraine, the Soviet state was ramshackle at best.

The Germans, says Snyder, “offered local populations the same opportunity that the Viennese took in 1938, to blame past collaboration on the Jews, even though almost everybody had a role in it,” and to make amends by taking part in the murder of the Jews. And they took it: “Around half, maybe more, of the murderers in the Holocaust weren’t Germans,” says Snyder. “So this is the situation where mass killing was possible, not where German power was ﬁrst accumulated, but where the Soviet Union had destroyed a state and where the Germans then destroyed Soviet power.”

It’s brilliantly illustrated in the historian’s comparison of Estonia and Denmark, two small Baltic countries; each with small numbers of Jews; one (Estonia) where state institutions were twice destroyed, and one (Denmark) where the state maintained a high level of sovereignty; one (Denmark) where 99 per cent of the Jews survived, and one (Estonia) where 99 per cent died—even though, as Snyder notes, “there was less pre-war anti-Semitism” in the latter.

Given the enormous contrast in outcome, something else was happening. Snyder fears that “the way we think about the Holocaust is itself rather Naziﬁed, so we think about the Holocaust in terms of race and ethnicity, which were, of course, Nazi categories. We tend to miss the politics. Where the Germans were willing to destroy states, Jews could be murdered in very high proportions. Where the Germans did not destroy them, they had to deal with those states, as one government among others.” Thus the Nazis did not murder British Jews or American Jews who happened to be captured in German territory, nor did they kill the Jews of their allies unless their allies specifically allowed them to do so.

When 20,000 Polish Jews resident in Austria ﬂed home in the wake of the Anschluss, the anti-Semitic pre-war Polish government accepted them back because they were citizens, but began drafting laws to strip citizenship from Polish Jews abroad, including the 60,000 still resident in Germany. The Nazis, who at home governed a law-bound state and who had not yet realized genocide was even possible, grew alarmed: Once the Polish Jews lost their citizenship, the Nazis would be unable to expel them into Poland. On the single night of Oct. 28, 1938, the SS forced 17,000 Jews across the Polish frontier. But they didn’t kill them: Everywhere in occupied Europe, the proportion of Jews surviving was in direct relation to the strength of their individual states and the power of their ofﬁcial papers. In France, Jewish refugees who lacked French citizenship were 10 times more likely to be killed than those who had the life-giving papers.

It’s that emphasis on the beneficial role of states that guides Snyder as he moves to the second part of his subtitle: the Holocaust as warning. “Since we have tended to draw the conclusion that Germany was too strong of a state, we have sometimes drawn the conclusion that it’s all right to destroy states.” The American invasion of Iraq in 2003 was premised on the idea it would promise freedom, Snyder says, because, for Americans, “the problem of repression is always the problem of too much state. The Americans who were in favour of that war were hugely optimistic about what happens when you remove a political regime.” Islamic State and its murderous realm is a spectacular example of the lawless void created by state destruction. “Something like [Islamic State] could only arise in a place where the state, like the one we chose to knock out in 2003, has been knocked out. I don’t like authoritarian regimes, but there’s something worse, which is the removal of political authority and its replacement by people who are able to organize anarchy. That’s what totalitarianism is—the organization of anarchy.”

The world’s rising tide of refugees—drowning in the Mediterranean, making their way westward through Europe, and facing popular hostility—also feels uncomfortably like the 1930s. For Snyder, the European popular reluctance to accept them resonates with the way anti-illegal immigration has become the compelling issue in the U.S. presidential campaign. The Jews who were killed in the Holocaust had to be ﬁrst stripped of citizenship, the historian notes, most often by destroying the country where they held citizenship, and that is the parallel he sees with contemporary refugees. If displaced persons have no recognized documents, and “if states are unwilling to recognize these people as potential citizens, they have nowhere to go.”

For Snyder, both left and right in his country misread the lessons of the Second World War and the Holocaust in the same way. The left’s idea of postmodern state fragmentation, and the right’s celebration of the triumph of the market, are playing with ﬁre. “What historians always have to work against is the way that historical memory is not about what actually happened. Historical memory is about what’s convenient.” As the stolid bureaucratic state fades away, “we may be confronted with things which we thought could never happen again.”