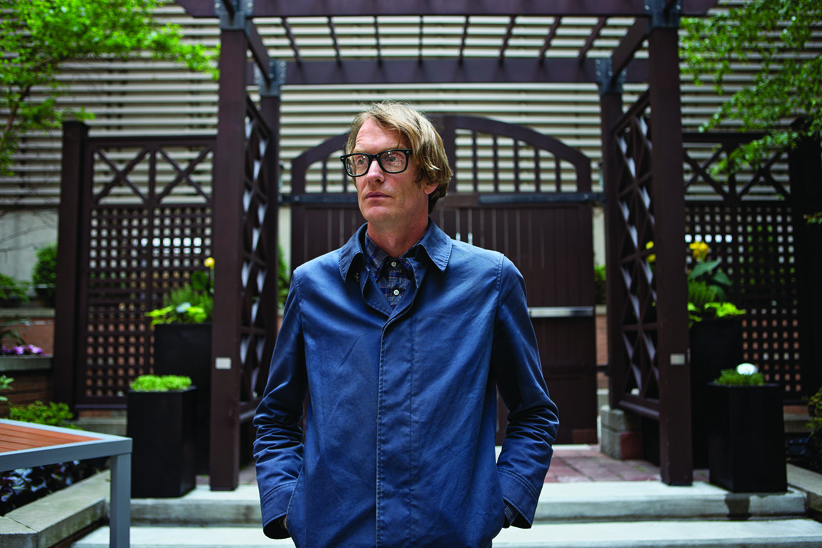 Patrick Dewitt is photographed in Toronto on June 2, 2015. (Photograph by Jennifer Roberts)

So far, so good. Talk of whether lightning will strike twice has inevitably swirled about Patrick deWitt’s new novel, Undermajordomo Minor, given what happened to his last one. In 2011 The Sisters Brothers took deWitt from, as he put it to Maclean’s, “maybe 2,000 readers” to the shortlists of all three major Canadian literary honours—the Scotiabank Giller, the Rogers Writers’ Trust and the Governor General’s award—as well as the Anglosphere’s most prestigious fiction prize, the Man Booker, and from there to a vastly expanded readership. DeWitt, born on Vancouver Island but long resident in Portland, Ore., won two of the Canadian awards. Beguiling, highly original and darkly funny—Sisters Brothers also took the Stephen Leacock award for humour—deWitt’s tale of two fraternal assassins during the California Gold Rush naturally raised questions about whether he could do it again.

In short: yes. Written under enormous pressure—and delivered a year late—Undermajordomo Minor has already made its way on to the 12-title long list for the Giller, the first of the national honours to make public the results of its (preliminary) winnowing of contenders, and on to the Maclean’s bestseller list. And why not? Few in the book world think deWitt simply got lucky last time around, or any luckier than any deserving writer, given the random nature of literary prizedom. Except for deWitt himself. “In the years since I’ve realized how lucky I was,” he says. “The hardest thing in the world for a writer is to amass a readership. So many good books come out and so many good books disappear. An audience is crucial, a back and forth with the invisible readers.”

Related: The Interview: Patrick deWitt, on life after ‘The Sisters Brothers’

DeWitt calls his new novel and its predecessor “bookends,” and thematic and stylistic parallels do abound. Each subverts—or rather, gleefully eviscerates—a genre (the Western in Sisters Brothers, the European fairy tale in Undermajordomo) and are full of off-kilter character names (Hermann Kermit Warm, Major-domo Myron Olderglough). And each novel visually leaps off a bookshop shelf with a distinctive and arresting title-cover image combination. (Both covers were designed by Portland artist Dan Stiles.)

For deWitt, cover and title act together like a carnival barker, “who just needs to get you inside the tent. With some covers, I think it’s a wonder I went into the tent in the first place.”

He may need the barker’s services more than most authors. Mere plot descriptions scarcely do justice to deWitt novels. The premise in this case—in an undetermined yet clearly Ruritanian time and place— young Lucien Minor, known as Lucy, takes a job as assistant to the major-domo of a castle (hence the title). Adventures, both traditional and flat-out weird, ensue. But it doesn’t even hint at the power of a story about the longing for love and the horrible things we will do for it.

DeWitt takes full advantage of the way his fairy-tale setting allows him to present outlandish events in the deadpan manner also exploited by Salman Rushdie in his new novel. Two Years Eight Months and Twenty-Eight Nights and Undermajordomo Minor are also bookends of a sort—the one resting on the Eastern fairy tale tradition (1,001 Arabian Nights) and the Western (the Brothers Grimm)—and both have abrupt transitions of what Rushdie described as the “pumpkins turn into carriages” sort. “My instinct is to write under the cloak of an opaque historical setting,” says deWitt. “There are the 19th-century trappings from both Westerns and fairy tales, but both my novels are imbued with modern sensibilities, a lot of neurotic underpinnings.”

There’s an openness, almost a demand, for a note of the fabulous in the contemporary literary zeitgeist, which links deWitt not only to Rushdie but to others on the Giller list—consider Andre Alexis’s Fifteen Dogs, about canines endowed with human consciousness—and may explain why they are on that list when other well-known authors, more traditional in style, are not. But it is that unsettling modern sensibility that lies at the heart of deWitt’s appeal as a writer. It’s often hard to like his intensely self-absorbed characters, and even harder not to care what becomes of them.