The Most Dangerous Man in America

An effort to return general Douglas MacArthur to his former glory 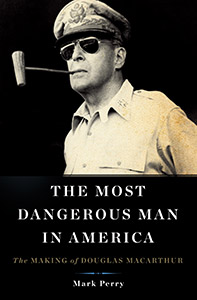 THE MOST DANGEROUS MAN IN AMERICA: THE MAKING OF DOUGLAS MACARTHUR

He has returned again. And this time he wants his reputation back. “History has not treated MacArthur well,” writes Perry of Second World War general Douglas MacArthur, citing a poll that recently ranked him as America’s second-worst military commander (Revolutionary War traitor Benedict Arnold was first) plus embarrassment among current-day Pentagon staffers at his record as evidence of MacArthur’s slide in respect.

In an effort to return MacArthur to his former glory as one of America’s greatest war heroes, the historian’s solution is to shorten the time frame. This new biography begins in July 1932, when MacArthur was army chief of staff in president Franklin Roosevelt’s administration, and ends with him signing the Japanese surrender agreement aboard the USS Missouri in Tokyo Bay on Sept. 2, 1945.

Perry is not writing a hagiography, and fairly considers MacArthur’s wartime successes and failures. His role in the destruction of the American air force in the Philippines the day after Pearl Harbor is one of several mistakes, although there are many more offsetting strokes of martial genius. In 1944 he famously declared “I have returned” after landing with U.S. forces in the Philippines. Less than a year later, Japan capitulated. Perry also offers an unvarnished assessment of MacArthur’s political skills. While the publicity-seeking Republican long had his eye on the White House, he was repeatedly outmanoeuvred by Democrat Roosevelt.

Despite the balance with which he treats MacArthur’s war record, however, Perry is deliberately only telling part of the story. Cutting things off in Tokyo Bay in 1945 denies readers the chance to weigh the rest of MacArthur’s legacy. Missing pieces include his masterful postwar rule of Japan, a brilliant amphibious landing at Inchon in 1950 as supreme commander during the Korean War, and, most crucially to his modern reputation, his firing by president Harry Truman for insubordination when he publicly criticized Truman’s order not to bomb Communist China.

If MacArthur’s standing in the popular mind has suffered in the six decades since, it is mostly due to the ignominy that has surrounded him after his dismissal and contemporary views on the primacy of civilian control over military matters. Ignoring these issues will do little to change how history views him.