A suspenseful tale of desert survival

Book review: This engrossing wilderness tale starts with a teen who rides the tramway to the California mountains 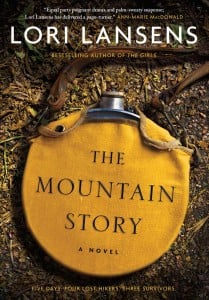 Lansens, an internationally bestselling Canadian author, publishes her fourth novel this month. Unlike her other novels, including the wildly successful The Girls, this one isn’t set in southern Ontario, but in the desert near Palm Springs, Calif. (mostly in the “thrice-foreclosed-upon Verdi Village mobile home development that bled out over two square miles of hard-baked, treeless earth”), and the soaring mountain range (“hundreds of miles of pristine wilderness”) that overlooks the city. The narrative is built as much upon the harshness of both landscapes as it is on Wolf Truly, who turns 18 at the height of the novel’s action, and who, at the start of the book, rides the aerial tramway to the top of the mountain as he mulls over “the sum of me—all the befores and afters that had brought me to that moment.”

Fundamentally, The Mountain Story is a wilderness survival story. Wolf and three women he randomly meets on the mountain—Nola, Bridget and Vonn—get lost without supplies and have to fight for five days to find a way back to safety. We read about the choices they have to make while desperate, and the pain, both physical and emotional, that they are made to manage. The book’s dust jacket reads, “Five days. Four lost hikers. Three survivors,” so, all the while we’re reading we’re wondering who is going to die, and how. It’s engrossing and tense. But there’s a quieter, more common kind of survival that the book concurrently examines (which we grasp through Wolf’s memories): the everyday survival of a boy whose will to keep on living has to be singularly his own. Wolf can’t depend on his wayward, criminal father, his good but long-deceased mother, nor the extended family he fears. The only true home Wolf has had is on the mountain. But the mountain both welcomes and forsakes him, in its natural, non-malicious way.

Lansens’ descriptions evoke a sense of place and of unseen histories. As the tram hoists Wolf to colder, greener climes, he smells “ancient odours that spoke volumes of loss” amid the flora, while the desert around Palm Springs is home to “orchards of wind turbines.” Poignant and heartbreaking, this book rivets with its examination of what the body and soul need to stay alive.