'The next thing in non-fiction'

A review of 'The Empathy Exams: Essays' by Leslie Jamison 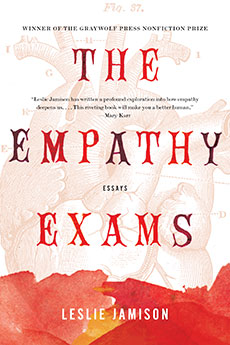 In a proﬁle published 15 months before his death, Peter Kaplan—the late, great editor of the New York Observer and a midwife to years of New York writing talent—worried about where “the next generation of ambitious, genre-bending journalists . . . , the auteurs of the craft” would come from. “Where is the next thing?” Kaplan asked the New Republic’s Nathan Heller. “Why isn’t it coming up?” Among the many reasons, then, to be sad about Kaplan’s early death from cancer is that he did not live to read the essays in The Empathy Exams. Because, based on this book, Leslie Jamison is very much the next thing in non-fiction. A writer of uncommon intelligence, she merges memoir with reportage and criticism to create something not entirely new, but certainly novel and definitely exciting.

The Empathy Exams is Jamison’s second book. A graduate of the Iowa Writers’ Workshop (she also has a degree from Harvard and is at work on a Ph.D. at Yale), she published a novel, The Gin Closet, in 2010. Her essays are at once diverse and tightly focused. They loop out to odd locations, including a conference for sufferers of Morgellons disease and an ultra-marathon on an old prison site, before circling back to the central theme. As the book’s title implies, Jamison is fascinated by empathy—by pain, especially, and how we recognize and feel it in others. In the book’s title essay, she uses the fictional symptoms from her time working as a medical actor—where student doctors were literally graded on their ability to show empathy—to explore her own real medical procedures, including heart surgery and an abortion. In a later piece, she stands up for sentimentality, playing with the similarity of the words “saccharine” and “Saccharin,” one a term for treacly, unearned emotion, the other a compound that gives sweetness without substance.

Jamison often ends her essays with great flurries of direct intent. In one piece, she stacks paragraphs with sequential sentences that all begin “I believe . . .” or “I want . . .” It’s almost as if, having drawn in so many disparate parts—Frida Kahlo, subprime mortgages, heartbreak, her broken nose—she wants, in the end, to make her meaning more than clear. “I want us to feel swollen by sentimentality and then hurt by it,” she writes, “betrayed by its flatness, wounded by the hard glass surface of its sky.”