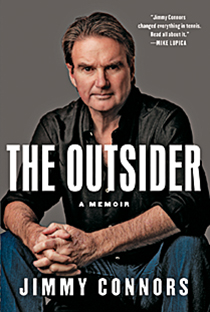 It’s surprising that Connors, who won a record 109 pro tennis tournaments, should have waited 20 years after leaving the circuit to publish this memoir: he so often relished playing to the crowd. That said, as his book’s title suggests, he’s always his own man—to a fault.

His on-court tantrums sometimes led to penalties and fines, and he has been critiqued for the somewhat cavalier and self-serving way he reveals in The Outsider that Chris Evert, his then-fiancée, had an abortion in 1974. There’s also a bitter passage about Andre Agassi, who, he claims, somewhat disingenuously, “didn’t affect my life in any way.”

But he’s not without a conscience. He agonizes over an early-’80s affair and regrets the compulsive gambling that for a while dominated his post-tennis life. Connors ultimately rejects anything that might harm his family, which is, for him, inextricably linked with tennis: he learned a “woman’s game” from his mother, and derived his fighting spirit from seeing her and his grandfather savagely assaulted by thugs on a public court in his hometown of East St. Louis when he was eight.

On the court, Connors looked ungainly, and his manner could be crass, but he had a rough wit and charm. His book embodies all of these qualities, and it’s best when they come together: he describes himself running away from Italian models snorting coke at a party (afraid of being photographed with them), surreptitiously urinating on court in Washington (no one noticed, he claims), recording songs written by Paul Anka, who tried to make him sign over tennis-related royalties (an anecdote that somehow didn’t make Anka’s own memoir), and making a fan of Marlene Dietrich, who sent him a photo reading, “WE JUST TALKED. F–K THEM ALL.”

Refuting the idea that in the mid-’70s, at his peak, he was a one-dimensional player reliant on his groundstrokes, he writes, “I could end up playing five or six different ways in one match.” In The Outsider, he comes across as an arrestingly complex character who’s frustrating at times, but never predictable, and never, ever boring.