The telegraph and the murderer 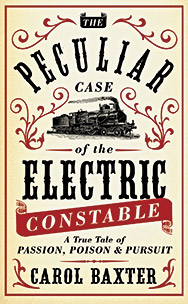 The Peculiar Case of the Electric Constable: A True Tale of Passion, Poison & Pursuit

The information age dawned on New Year’s Day, 1845, when, for the first time, the telegraph was used to catch a murder suspect. Before, the telegraph was an eight-year-old experimental technology struggling to find a commercial application. Yet, as Baxter successfully argues in her deftly woven tale of crime, religion and science, after that day it was the “electric constable” that could do no wrong.

The hunted man was John Tawell, a Quaker wearing the sect’s old-fashioned, distinctive outfit. And unluckily for him, he took a train 29 km from Slough to Paddington railway station in London, the only two destinations in the world connected by telegraph lines. The operator sent a quick missive to his counterpart in London that authorities should be on the lookout for the as-yet-unidentified man: “The suspected murderer was seen to take a first-class ticket for London by the train which left Slough at 7h. 42m. p.m. He is in the garb of a kwaker [sic] with a brown great coat which reaches nearly down to his feet. He is in the last compartment of the second first-class carriage.”

Tawell was apprehended for the murder of his ex-lover Sarah Hart. Papers on both sides of the Atlantic were obsessed with his murder trial, which included scientific experts battling over how he’d killed Hart. Some believed he used cyanide, while others argued that theory was impossible since the surgeons who examined her body didn’t detect cyanide’s telltale smell and signs. In the end, Tawell was convicted and sentenced to die. Thousands streamed to Aylesbury to witness his hanging on March 28 of the same year. Even the executioner, William Calcraft, was mobbed. (As Baxter points out in delicious detail, Calcraft got a generous stipend for his services, as well as the prisoner’s clothing and belongings, which he often sold to Madame Tussauds for a handsome profit.) A few months later, Sir Francis Bond Head, the former lieutenant-governor of Upper Canada, was travelling from London to Slough in a silent, packed carriage, when one man, on seeing the telegraph wires arrayed next to the tracks, muttered, “Them’s the cords that hung John Tawell.”