The Ping-Pong Fanatic who Changed History 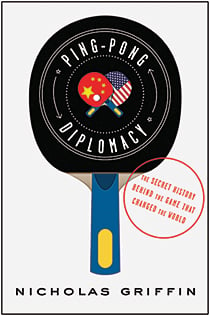 The year was 1971. The war was Cold. The U.S. table tennis team was in Japan for the 31st World Table Tennis Championships when the players received an unexpected invitation: to hop over to China for a round of Ping-Pong. Days later, the team became the first official American delegation in more than 20 years to set foot in Beijing—and “Ping-Pong diplomacy” was being hailed for having restored Sino-U.S. relations. A year later, Richard Nixon was in China, exchanging handshakes with Mao Zedong. In Ping-Pong Diplomacy, Griffin tells the tale of the man behind it all.

The book begins in merry England in 1909, where a plump five-year-old aristocrat named Ivor Montagu falls in love with table tennis. Ping-Pong remains Montagu’s sole passion—until, as a teenager, he discovers Communism. Soon, and through a series of events that might be deemed too outlandish for the sensible reader, were they not entirely true, his two loves intertwine. Montagu founds the International Association of Table Tennis and begins travelling behind the Iron Curtain to teach the game. At the same time, he is approached by a Kremlin agent and summoned to Moscow, where he becomes a Soviet spy and a fishing companion of Trotsky. (All the while, Montagu is working as Alfred Hitchcock’s producer and befriending the likes of Charlie Chaplin.)

Through Montagu’s influence, Ping-Pong goes global. Griffin tracks its spread, leading us on a jolly romp through the 20th century: the First World War, the Spanish Civil War, the Second World War, the Cold War, China’s Cultural Revolution. Special attention is given to England where, in 1937, the king lent Ping-Pong his royal patronage, and to Communist China, where Chairman Mao made the game his country’s (low-cost) national sport and referred to the three-time world champion Zhuang Zedong—who died in Beijing on Jan. 19—as “My Lord, Zhuang!”

Before long, Montagu has attained “astonishing clout behind the Iron Curtain.” A particularly telling moment comes in 1959, when two men are honoured in Moscow with the “Lenin Peace Price”—the Soviet equivalent of the Nobel. One is Nikita Khrushchev, first secretary of the Communist party. The other is Ivor Montagu.

“The Ping-Pong ball is very important,” the wife of Chinese premier Zhou Enlai would note in 1971. “It can shake up the whole Earth.” And to think that, just half a century earlier, the Times was still mocking the mighty sport—joking that Ping-Pong’s popularity would inspire “a great surge onwards in the training of tiddlywinks.”