The prince who advised The Rolling Stones

Our book review of Prince Rupert Loewenstein's 'A Place Among Stones' 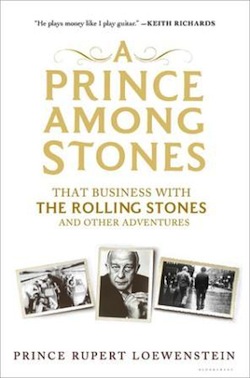 At first glance, Prince Rupert Ludwig Ferdinand zu Loewenstein-Wertheim-Freudenberg, scion of a ruling line of the Holy Roman Empire, seems an unlikely associate of the Rolling Stones. However, Sir Mick Jagger’s proclivity for “crossing the portal into a different social world,” as Loewenstein puts it, was established as early as the late ’60s, when the two met and bonded. At the time, the Stones were being taken to the cleaners by the British taxman and their manager, Allen Klein; Loewenstein, who owned a merchant bank, was in a position to help.

His 40-year business relationship with the Stones forms the basis for this book, and Jagger, unimpressed, has decried Loewenstein’s lack of “good manners” in penning a financial tell-all. Indeed, there are embarrassing revelations here, such as the time the front man, considering himself the band’s “quasi-manager,” tried to skim off an extra share of the profits. Loewenstein describes how over the years he saved the Stones from one another as well as from greedy promoters and hangers-on. He explains how financial decisions influenced the Stones’ art, as he relocated them to the south of France (hence, Exile on Main Street), hooked them up with Atlantic Records in the U.S., and showed them how to run a profitable tour as an efficient “hierarchy” comparable to a court. Throughout, he offers eye-opening insight about the transition rock bands must make from idealist rebels to shrewd businessmen if they’re to learn how not to be exploited.

Loewenstein, with his colourful anecdotes, proves an amusing guide. At times his banker’s perceptions (e.g., that the Stones should have sold the band to an investor) do mark him as a little culturally tone-deaf, and although he portrays his former charges in an affectionate way, he dismisses the Stones’ oeuvre as, for instance, “rhythmic music expressing trite emotion.” The prince remains a minor, if intriguing, character in the history of music royalty, recalling T.S. Eliot’s description of Hamlet’s Polonius: “Full of high sentence, but a bit obtuse.”