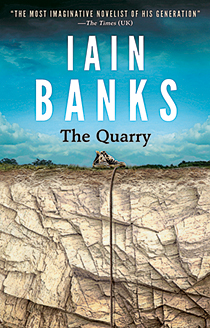 The Quarry
by Iain Banks

Beginning with his 1984 debut, The Wasp Factory, Banks published a book every year; this March, he was well into this, his 29th, when he found out he had terminal gallbladder cancer. Shortly before his death in June, the relentlessly imaginative Scottish novelist told the Guardian that had he been diagnosed earlier, he’d have gone out with a bigger bang, such as one of the “great big rollicking” science fiction tomes that he published as Iain M. Banks.

Banks called The Quarry a “minor” work, and while it’s compact in scope, it tackles major themes. It pivots around middle-aged Guy, an entertainingly bilious ex-editor whose crumbling Victorian house in rural England is due to be razed as the mine behind it expands, and who—in an eerie, unplanned echo of his creator’s life—is dying of cancer. Six of Guy’s university housemates have gathered to pay their respects and reminisce; they’re also searching for a videotape they made as students, whose contents, they believe, could harm their careers.

Some of the six are well-off and some are drifting through life; all are unhappy and argue about the state of Britain and of the world. Apparently Banks wrote some of Guy’s own valedictory tirades after his diagnosis, and one can imagine him, through his character, ranting about everything from vapid celebrity culture to bankers’ entitlement. It’s bracing stuff, balanced by the narrator, Guy’s 18-year-old son, Kit, who is intelligent, somewhat emotionally stunted, socially maladroit and crucially rather sweet, with a sense of wonder that his elders lost long ago.

The book is rather light on plot, and it’s tempting to race through it, impatient for the answers to its central mysteries. (What’s on the videotape? And who is Kit’s mother?) But afterwards you may want to revisit its memorably wounded characters, its flashes of dark humour and the wisdom that emerges between Guy’s jaundiced experience and Kit’s enthused innocence. The Quarry is a fitting send-off for its unsentimental author: a farewell wave with a raised middle finger.