The real story behind the most famous scandal in sports history

The Betrayal: The 1919 World Series and the Birth of Modern Baseball 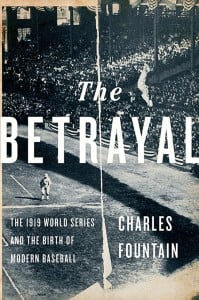 THE BETRAYAL: THE 1919 WORLD SERIES AND THE BIRTH OF MODERN BASEBALL

It’s the most famous scandal in sports history: the 1919 World Series, where eight players for the Chicago White Sox allegedly accepted bribes to throw some of the games against the Cincinnati Reds. As with many famous sports stories, so many urban legends have grown up around it that it’s all but impossible to figure out what actually happened. Fountain, a journalism teacher and sports historian, tries to sort through the archival evidence and separate fact from fiction. But he admits that when all the participants are dead, and many pieces of evidence are dubious or disputed, it’s hard to know for sure: as he points out early on, we don’t even know if the White Sox lost because they were trying to lose “or because the Reds simply beat ’em.”

Fountain does a good, patient job of telling us what it is possible to know. For example, the White Sox’s star player, Joe Jackson, has been mythologized as an innocent victim because of his high batting average in the series. Fountain points out that even if he didn’t actually try to lose, “by his own admission, he took the gamblers’ money, and he kept the guilty knowledge of the fix to himself.” And while no one will ever be able to prove that gambling king Arnold Rothstein was behind the fix, Fountain makes it clear that he was “the only plausible source,” especially because all the gamblers connected to the scandal “had a direct and proven connection with Arnold Rothstein.”

Because Fountain is so concerned with accuracy, The Betrayal is inevitably a less exciting read than the most famous book on the scandal, Eight Men Out, where Eliot Asinof threw scholarship to the wind and gave us a story with clear protagonists and villains. But Fountain does a much better job of putting the story in the context of the baseball world of the time, showing that the major leagues had a serious problem with gambling and allegations of rigged games. The book gets genuinely gripping in its second half, when he tells the story of White Sox owner Charles Comiskey and his attempts to cover up the fix. It’s too bad that, as Fountain admits, a kid may never have actually told Jackson “say it ain’t so, Joe!”—many people, he tells us, think a journalist made the whole scene up. But the things that really happened are certainly interesting enough.