The religiousness of science: Pictures of how we see the universe

A magnificent book presents visualizations of the sky, and the universe beyond, created over 4,000 years 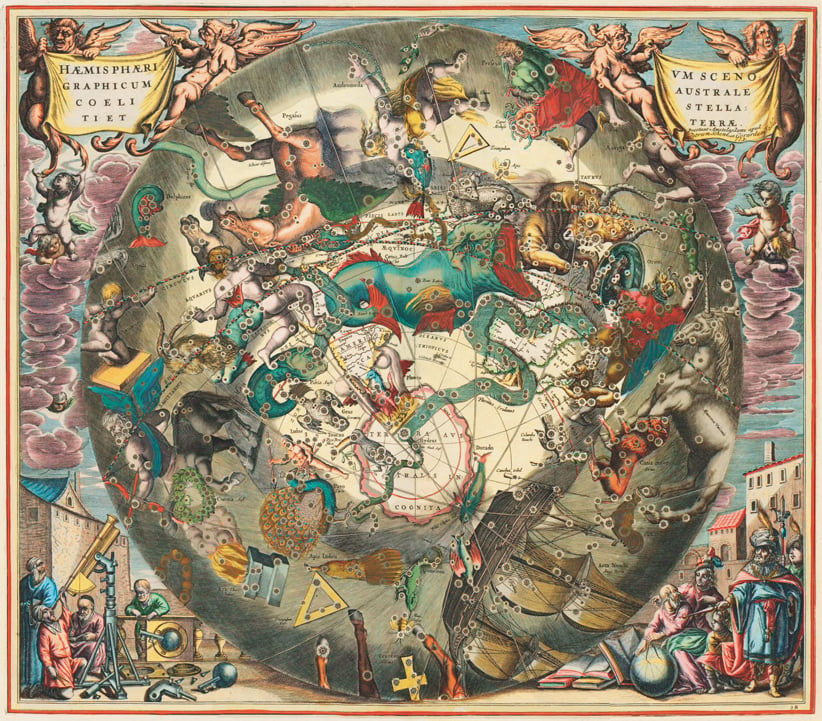 1660: This plate from Andreas Cellarius's Harmonia macrocosmica is one of the four that present a new way of looking at the celestial spheres. In Durer's southern sky and Apian's northern one on pages 226 and 227 respectively, our vantage point is from the outside looking in - but there is no backdrop. here the unsigned engraver employed by Cellarius's Amsterdam printer had a rare insight: If Earth is at the center of the starry sphere, and that crystalline sphere is seen from the outside then Earth should be visible, too. Here, we see the southern sky and southern hemisphere together - a merger of celestial and terrestrial cartography. Abrams

If a person from the past, no matter how long ago, were to be transported to the present, the one thing that would reassure him would be the familiarity of the sky: the Pleiades, an open cluster of stars visible to the naked eye at northern latitudes in the fall and winter; Orion, the hunter; the moon in its various phases. The sky for the ancients was a compass and a calendar. The regular pattern of the sun through the day, the moon over a short cycle, and all of the sky over an annual cycle, became the means for coordinating meetings, and defining age and time. The sky was both directly and intimately connected with every moment of our lives. It was—and is still—reliable, comforting and beautiful, at the same time as it remains remote, distant and mysterious.

What are stars? What are we looking at? Where are we exactly? These questions marked our emergence. The study of the sky helped to make us self-conscious: It gave us perspective. “It drew us out of the world and into the universe, and made us human,” says Jesuit meteoriticist Guy Consolmagno, the 2014 recipient of the Sagan Medal for communication by the American Astronomical Society’s planetary science division.

This search, both outward and inward, is illuminated in a handsome book by Michael Benson, Cosmigraphics, released by the art publisher Abrams this month. In 10 chapters, Cosmigraphics reproduces visualizations of the sky we see, and the universe as a whole that we imagined and later discovered.

When he was six years old, Benson’s mother took him to see 2001: a Space Odyssey. Afterward, he trailed after her, asking, “What was it about? What did it mean?” The next year, a man walked on the moon for the first time. Benson’s parents were in the American foreign service and he grew up living all over the world, interested in everything, but those two events in particular left a persistent and profound impression.

Benson’s career has spanned writing, documentary filmmaking and photography. His previous photo-essay books compiled images of space and the solar system taken by telescopes and cameras on interplanetary spacecraft. “All retrospectives, art and otherwise, should shock us awake the way this one does,” raved one reviewer. In his new book, Benson turns his attention to how humans over millennia have imagined and represented space and our planet by means other than photography: illuminations, etchings, wood-block prints, paintings, as well as computationally and mathematically accurate simulations built by supercomputers.

He assembled the images in a marathon nine-month research session, mostly drawing on online resources produced by libraries that have scanned their rare books to make them widely accessible. He researched collections in Europe and the United States, from the famous to the obscure. He delighted in discoveries, such as the library of the American Association of Variable Star Observers and its collection of 19th- and 20th-century books. He spent days there, discovering and photographing illustrations. “Cosmigraphics documents the stages of our evolving understanding as a species . . . about the cosmos and our position within it,” he writes.

Leaf through the book, and you discover how deeply people thought about the cosmos and its relationship to their lives, and how that evolved over 4,000 years. Pictures of the universe—what it looks like, how it came to be—are stories of both religion and science, and Cosmigraphics encompasses both of those histories. You can consider Renaissance depictions of creation in 1573 on one page, then on another, an image of the cosmic microwave background radiation produced by scientists using the Planck satellite in 2013. In one chapter, Benson singles out the work of 18th-century English astronomer Thomas Wright, who posited that the stars were in motion orbiting a centre, and that the Milky Way was a disk, long before astronomers had discovered how to calculate velocity from the red shift of spectral lines.

Iconic moments in astronomy—and, in fact, in the history of science as we know it—are presented here too: Galileo’s drawings of his observations of the moons of Jupiter; Kepler’s observations of comets; Copernicus’s drawings of the solar system. These gave way, of course, to modern geological maps of the moon and Mars and supercomputer visualizations of the gravitational attraction between 30,000 galaxies, including the Milky Way in a supercluster.

One image depicts a growing awareness, and it captivated Benson. It shows four medieval men standing in a garden, looking through a portal at a planet, presumably Earth, in space. The planet is studded with buildings, as if the artist knew that the entire world were going to be developed. Blue sky is separated from a starry, moonlit night by a red-and-gold sunset. The image is from a 15th-century edition of a 13th-century encyclopedia, On the Properties of Things. In his imagination, the artist has moved outside the world and is regarding it affectionately and self-consciously, considering what and where we are. In his introduction, Benson quotes Werner Heisenberg: “Science forgets that in its study of nature it is studying its own picture.”

On the facing page, Benson places a page from Peter Apian’s Caesar’s Astronomy, an interactive book from the 16th century that allowed the reader to align paper wheels that were layered one on top of the other. With these functioning as round slide rules, the reader could graphically see and predict the changes in the night sky over time, such as the phases of the moon, eclipses, the position of the sun and the planets. Apian produced the book (publishing it in 1540) to make astronomy easy, and dedicated it to his patron, Holy Roman Emperor Charles V.

Apian was a mathematician, cosmographer, artist and humourist. One imagines him and his workers, bent over work tables —carefully, patiently, meticulously creating these paper disks and assembling them. His book is “probably the most remarkable book ever in the history of astronomy,” says former Harvard University astronomy professor Owen Gingerich, who wrote the foreword to Cosmigraphics. Gingerich, whose book God’s Planet was published recently by Harvard University Press, has seen 100 copies of Apian’s book; he believes there might be only 150 in the world. He collects rare astronomy books and, when a German press produced a faithful facsimile of Caesar’s Astronomy in 1970, he bought one and took it apart. “It’s very interesting; When you take it apart, you see there are instructions for how to put it together,” Gingerich says.

Humanity has, for its own part, been attempting to put the pieces of our universe together for millennia. The oldest astronomic visualization in Benson’s book is the Nebra sky disc, an oxidized copper disk that is 12 inches in diameter and decorated with a gold crescent moon, a large gold sun and small gold dots for stars. Excavated in Germany, it’s presumed to have been created between 2000 and 1600 BCE. On it, high between the moon and the sun, is a distinct cluster of seven: the Pleiades, shining then, as they do now.