The truth about Brady Bunch fantasies

Book review: How Remarried Couples and their Families Succeed or Fail 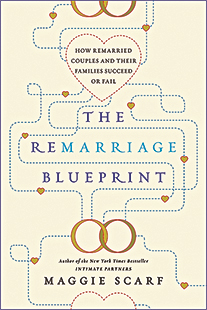 The Remarriage Blueprint: How Remarried Couples and their Families Succeed or Fail

Meet Julie and Matthew, who met and fell in love after their first marriages dissolved. The new union, however, was fraught with difficulties. Matthew and his first wife, who continued to run a business together, wouldn’t let Julie discipline their recalcitrant son while the biological parents were away together on business. Julie’s huffy teenage daughter refused to acknowledge Matthew, who viewed his stepdaughter as a “total nightmare.” Matthew resented Julie for not loving his son, while Julie felt criticized for how she raised her daughter. Both kids were outraged by the intrusion of the new step-parent. In Blueprint, Scarf looks at seven remarried couples and the complications of blending two families. Spoiler alert: it’s tough.

Take the Burkes. When Ted and Carole married, Ted’s grown kids were still living at home without contributing to household expenses. They worked part time, when not playing video games and making a mess in the kitchen. Their new stepmother, Carole, was disgusted by their fecklessness and their father’s refusal to see them as young adults. Ted’s daughter had started running the house at age 14, when her mother died, and she didn’t appreciate Carole interloping in her kitchen. It got ugly when Carole discovered that Ted was in heavy debt and needed a bailout. So began the unravelling of the second marriage, but with a surprise twist: the kids learned from Carole’s example of hard work and financial planning. They ended up loving and respecting their ex-stepmother.

One thing emerges from the book’s searing accounts of remarriage: there’s no predicting anything. The Brady Bunch fantasy can actually come true, and a seemingly “good fit” can fall apart. Scarf does a wonderful job teasing out the emotional complexities of remarriage, and her book makes a sympathetic companion for anyone stranded inside a new mate’s nuclear family.