In Near Enemy, Sternbergh stays with the decaying, terrorized and largely evacuated near-future New York City setting of his debut novel. 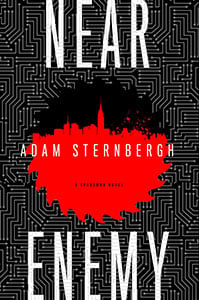 More than eight decades after Dashiell Hammett introduced Sam Spade and three after William Gibson began tour-guiding readers through the dark corners of cyberspace and the Sprawl, Adam Sternbergh’s style-conscious pastiche of these two heavyweights hands Spademan, the author’s “bullet” (hit man) and narrator, another twisty and violent case to solve.

In Near Enemy, Sternbergh stays with the decaying, terrorized and largely evacuated near-future New York City setting of his debut novel. There, the very rich regularly plug into the limnosphere, a computer-generated construct that enables them to inhabit otherwise impossible fantasy places. (In “the nuts-and-bolts world,” meanwhile, nurses feed and monitor their unconscious bodies.) Travelling between New Jersey and the former cultural powerhouse, Spademan, a flip-phone-using anti-hero with a tarnished heart of gold and a box-cutter in his pocket, commits to doing his ethically challenged version of the right thing. His latest case-for-hire involves murders, which hint at the possibility that “the limn” could be weaponized—with the result that gruesome deaths in its electronic wonderlands will lead to actual corporeal termination.

Given the menacing, hyper-noir atmosphere, it’s no surprise that each player Spademan meets—whether a corrupt cop, politician or religious leader—has ulterior motives and deceives with quarter-truth revelations. Sternbergh ably relates a nail-biting whodunit of switchbacks, double agents and truly mean streets through Spademan’s terse, hardboiled detective-speak. (His typical descriptions make Hemingway look verbose: “Blood sprays. Stained wings. Mark plummets. Wings clipped. Sword clatters. Mark’s grounded. Flame out.”) That stylization grows a tad wearisome, especially as the dialogue-heavy procedural suggests aspirations to become a film script—rather than, say, a thought-provoking novel aiming to scrutinize the complex contours of a dystopian reality. Gritty and page-turning but surprisingly lightweight, Near Enemy ultimately comes across as a compellingly dark network-TV episode hampered by the fact that its ambition is only that.