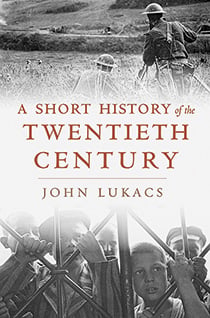 A Short History of the Twentieth Century

The 1920s, according to Lukacs, was the only true revolutionary decade of the last century—all that stuff we saw in the 1960s was merely “further exaggerations” of Roaring Twenties trends. That’s the sort of arresting remark that makes the Hungarian-born American scholar one of the most idiosyncratic historians of his era. At almost 90 years of age, he scarcely bothers to separate his own life from the larger history of the century, and given that he is a believer in the “short” 20th century—the concept that it ran from the outbreak of the Great War in 1914 to the fall of the Berlin Wall in 1989—he did actually live most of it. Lukacs despises populism and calls himself, as he does his hero Winston Churchill, a reactionary; Hitler he sees as the quintessential revolutionary.

And he makes a thought-provoking case for the 20s as the fulcrum of modernity. In the countries most fissured by the First World War, losers and victors alike, there was little nostalgia for the Edwardian era that preceded the conflict. There was peace and (relative) prosperity all right, but no one seemed to miss the social constraints. The revolution was driven by women, who changed their clothes and hairstyles as thoroughly as men changed theirs after the Napoleonic wars, and their lives and relationships with men even more. It all gives rise to the notion of the ’60s as the ’20s on birth control.

There are many more swipes at conventional wisdom and prevailing assumptions in this engaging book. The Cold War was a a bit of a sham: The Soviet Union was always a paper tiger, albeit one with nukes, and the American sole superpower status dates from the Second World War, not the end of the standoff with the U.S.S.R. Liberal democracy, which supposedly stood triumphant in the world in 1989, has been dying since 1914, slowly replaced by populism, sometimes democratic but always nationalistic.

Most intriguing is Lukacs’s conclusion as to what might be the 20th century’s signal achievement. Advances in physics, tellingly accomplished in the revolutionary 1920s, demonstrated that observers are an inseparable part of what they observe. Humans have thus returned, metaphysically, to the centre of the universe, something that will affect, unpredictably, our concept of ourselves for decades to come.