The scandalous life of the Soviet era’s greatest poet

Vladimir Mayakovsky hypnotized all who heard him read 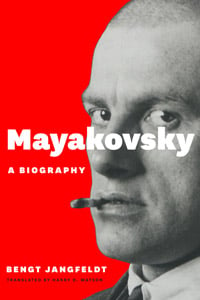 Vladimir Mayakovsky, the tragically emblematic poet of the early Soviet era, had a personality as big and tumultuous as the times he lived in, from the aesthetic upheaval of futurism through the political crisis of the October Revolution to the early purges of Stalinism. Mayakovsky cut a dashing figure; tall, disconcertingly handsome and a poet of incantatory quality who hypnotized all who heard him read.

It was his power as a performer that first won him the admiration, and eventual love, of Lili and Osip Brik. The Briks were a liberated couple, living in an open marriage, free of jealousy, when in 1915 Mayakovsky read for them. Although neither was initially won over by Mayakovsky the man—he was loud, uncouth, a provocateur with decaying teeth and a yellow blouse—the power of his poetry converted them. From that night until his suicide 15 years later, the life of Mayakovsky would be the life of the Briks.

Mayakovsky was unsuited to live in a ménage à trois free from bourgeois jealousy. A romantic, he demanded more of love—and of life—than it could ever give him. An endless storm of trysts bursts through their story, but Mayakovsky’s obsessive love for Lili was constant. She would be the muse for his greatest poetry, the source of the internal love in About This that “put a knife to my throat. / Like a blacksmith’s hammer / ringing from heart to skull.”

The other source was Bolshevism. As a futurist, Mayakovsky demanded new forms of art for a new kind of man. In the early days of the revolution this ideal seemed within grasp, but as the Bolsheviks consolidated power, the situation for the poet changed. The new man became the Soviet man and as the ideological winds changed, Mayakovsky changed too. His attempts to keep in line with the party while remaining true to his own monumental conception of himself degraded both poet and man. His legacy was helped no further by Stalin’s declaration, after his death, that he was “the most talented poet of the Soviet epoch.”

Jangfeldt successfully delineates the ever-changing loves of the Briks and Mayakovsky, but is less adept with the ideology of Mayakovsky and his relation to the Soviet state. In the mass of documents that survive there are few references to the political situation. Worse still, the life of Mayakovsky was rewritten during his own lifetime to keep him in line with current ideologies, and further rewritten after he posthumously became the national poet of the revolution. This great irony—Mayakovsky hated monuments and took his own life as Soviet society spiralled into the darkness of the Stalinist era—caps the blazing life of the writer, letting us hear his poetry in a new light, if not in the voice that he used to awe all who heard him.