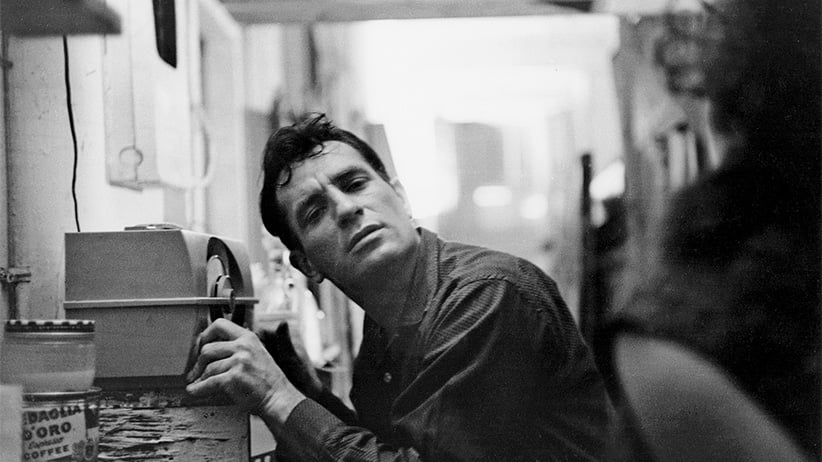 “The only people for me are the mad ones, the ones who are mad to live, mad to talk, mad to be saved, desirous of everything at the same time, the ones who never yawn or say a commonplace thing, but burn, burn, burn like fabulous yellow roman candles exploding like spiders across the stars . . . ”

In 1957, the publication of On The Road created a sensation. It was hailed as a great prose poem of the United States; it was also reviled as an undisciplined mess. It immediately became an enormous bestseller. Since its release, it has been treated as one of the foundational texts of American letters. It has never been out of print.

Its author, Jean-Louis Lebris de Kerouac—Jack Kerouac—became an overnight celebrity. The handsome, shy, charming devout Catholic was lionized as the voice of a new generation, the Beats. For his part, he thought of the Beats as “a generation of beatitude and tenderness.” But much to his distress, he and the Beats became symbols of reckless freedom, sexual licence and self-indulgence.

In 2006, the Kerouac archive was opened at the New York Public Library. Its contents were a revelation. Diaries, letters, essays and whole novels were found written in French. Kerouac, the avatar of the new America, was, in fact, Canadian. He was born in 1922 to parents who had fled Quebec in the great exode, seeking work in the U.S. Kerouac spoke only French until he was six and did not lose his accent fully until he was 20.

The most important find in the archives was Sur Le Chemin, a complete novel in French that is a precursor to On The Road. Set 15 years earlier, it features similar characters, but younger, teenage versions. Kerouac told Neal Cassady, a Beat icon and the inspiration for one of the two central characters in On The Road, that it explained all the mysteries of his most famous book.

Kerouac’s writings reveal that, although celebrated as an iconic American, he thought of himself as first and foremost Canadian. In La Vie est d’Hommage, he writes, “I am French Canadian. When I am angry, I often swear in French; when I dream, I often dream in French.”* He went on to say that “all my knowledge comes from my being French Canadian.” But as a Canuck in the United States, he felt patronized. He needed to hide his true self. Even with his friends in New York, with Allen Ginsberg and William Burroughs, he was “a completely different man. We have to live in English, it’s impossible to live in French. This is the secret thought of the Canuck in America.” Kerouac submerged his identity, despite the fact that he thought the French Canadian language was “the most powerful in the world.” He felt obliged to pass as American.

When he wrote secretly in French, he created a phoneticized version of the language that sought to capture the sounds and rhythms of Quebec’s working-class people. In other words, he tried to do in French what he’d tried to do in English when he produced prose that mimicked the sounds of jazz and the patter of bebop. This led to remarkable experiments with language: “We jam an frere gyre are.” (“Oui, j’aime mon frère Gerard”—“Yes, I love my brother Gerard.”) The prose is similar to the sonorities and wordplay of James Joyce. Kerouac, like Joyce, attempted to invent an altogether new literary style.

Kerouac led two contradictory lives. He wanted to be the “Canuck Proust”; he was hailed as a flawed American novelist. Kerouac could never be who he wanted to be: a Canadian. His Canadian side said, “Find your soul, smell the wind…close the book and find God” because “la vie est d’hommage.” La Vie est d’Hommage is the perfect title for Kerouac’s writings in French, since it captures his life through a French pun. It means both “life is a tribute,” and “life is a pity.”

Note: The original text of this story, which ran in the June 20 print edition, did not mention Jean-Christophe Cloutier, the University of Pennsylvania professor who edited the anthology and wrote the book’s introduction.

FILED UNDER: Editor's Picks Jack Kerouac on the road Quebec The Vault