The secret program that brought Nazi scientists to America 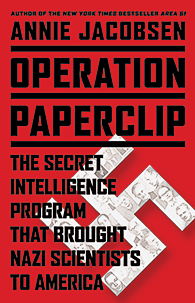 It’s been known for decades that a considerable proportion of the Cold War’s cutting-edge technology contests—from the space race to nuclear weapons development—turned on which side, Soviet or American, did better out of its share of the Second World War’s human booty, the scientific aces of the Third Reich. By 1952, the year a secret American intelligence committee fingered as the most likely date for “total war” with the U.S.S.R., the U.S. employed more than 1,600 of its former German enemies. (In the Pacific theatre, American intelligence agencies had been equally busy sheltering Japanese biological warfare specialists from prosecution.) By following 21 of Hitler’s technologists through a trail of no-longer-secret reports, including postwar interrogation accounts and private papers provided by the American descendants of those German scientists, Jacobsen assembles an unsettling portrait of what was gained, and at what cost, by Operation Paperclip.

Her 21 men were not apolitical technocrats. Fifteen were dedicated Nazi Party members; six had even stood trial at Nuremberg, and one was convicted of mass murder. Then again, one, whose wartime Berlin medical institute conducted experiments on epileptic children, is also credited with research that was crucial in allowing American astronauts to survive outer space. The prestigious Hubertus Strughold Award, annually given for outstanding work in aviation medicine, is named for him.

But none of the 21 mattered more, in terms of results and public opinion, than the aristocratic Wernher von Braun, the father of modern rocket science, whose fearsome V2 missiles were made by slave workers toiling under horrifyingly abusive conditions. (As has often been pointed out, more people died building V2s than from their explosive landings in England.) The basic facts about von Braun were widely known—he was an inspiration for Peter Sellers’ outrageous Dr. Strangelove in the 1964 film of the same name—but in the 1950s, he became the face of the U.S. space program. By 1969, when his work led directly to Neil Armstrong’s step onto the moon’s surface, von Braun was an American hero.

The situation in 1945 did indeed look different to soldiers and spies contemplating another war, one they fully expected to be more murderous than the one just finished, than it does from our perspective. But not so different that they did not realize, as Jacobsen makes clear, how morally wrong and politically explosive their schemes were. She details a depressing stream of hypocrisy, obfuscation and outright mendacity in the unfolding of Operation Paperclip. And then she leaves it to the reader to judge whether the ends justified the means.