The Silence Of Animals: On Progress And Other Modern Myths 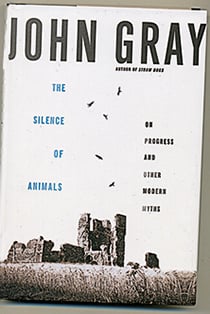 For a variety of sometimes contradictory reasons, Gray has a considerable popular footprint—extraordinarily large for a philosopher—especially in his native Britain. He writes beautifully and accessibly about real-world issues. He is preposterously familiar with the works of almost forgotten writers. He is an atheist who is sympathetic to religion, at least as long as the faith keeps its quest for meaning and human perfectibility safely on the far side of the grave. For if there is anything Gray despises, it is Western civilization’s long history of utopian thinking, a tendency now mostly secular, having migrated from Christian millenarianism to, first, the revolutionary Left (Jacobeans, Leninists) and lately to the political Right (the neo-liberal invaders of Iraq). Put into action, the belief in human progress, in Gray’s vision, always ends in a mound of corpses. It forgets or ignores that we are and always will be animals, prone to descend into barbarism in an eye blink. Except he wouldn’t think of it as a descent—more a sideways shuffle, shedding civilizational veneer as we go.

The full Gray is on display in his slender new volume. Gray quotes extensively from British intelligence officer Norman Lewis’s account of hunger- and disease-ravaged Naples after its 1943 “liberation” and from English falcon-obsessive J.A. Baker’s 1967 classic The Peregrine. The former leads into a numbing compilation of human behaviour during terrible times: we are only “intermittently” rational, the record shows, “and the idea that Jesus returned from the dead is not as contrary to reason as the notion that human beings will in future be different from how they have always been.”

The latter, via Baker’s 10-year immersion in the life of the peregrine—an immersion in the silence of animals, untroubled by the inner conflicts, dreams and drives of humanity—points to Gray’s ideal of godless contemplation. It’s not much: contemplation provides neither meaning to existence (for there is none) or more than a momentary respite from the need for meaning. But it is a respite, and all that we can ask for.

FILED UNDER: book review John Gray The Silence Of Animals: On Progress And Other Modern Myths