Murder in the air from the start. (This is not a spoiler.) 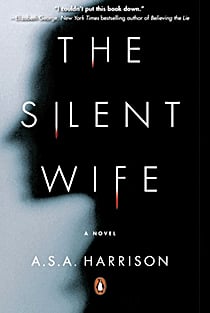 The Silent Wife
By A.S.A. Harrison

Jodi Brett, at 45, is the very picture of contentment, or so she believes. She lives in a Chicago condo with a view of the lake. A psychologist, she has an enviably light caseload of not-very-ill patients, which allows her to direct her energies to Todd, the centre of her life. Even after 20 years, she looks forward to the sound of his key in the door each evening. She will have prepared the garden toss with dressing; he will fix the martinis. They will then tuck into a dish he likes, say, beef Wellington, which she prepares with affection and skill.

Todd is similarly blessed. He is a wealthy man with a successful construction business, loves to drink after dinner with his buddies and usually has an extramarital affair on the go. Jodi accepts this as one of the union’s necessary compromises. None of his dalliances—which she strives to know as little about as possible—has been a threat. But most recently, unbeknownst to her, Todd has been carrying on with Natasha, the lubricious twentysomething daughter of his oldest friend, an absurd coupling that has restored Todd’s zest for life, or so he tells himself.

It is this affair that will cause Jodi’s life to unravel and, in time, Todd’s to end. This is not a spoiler. We know that murder is in the air from the start. It is the journey to his reckoning—and the twists along the way—that are among the novel’s principal pleasures.

The Silent Wife is touted by its publishers as a psychological thriller (more precisely, it is a psychoanalytic thriller with an Adlerian spin). It unfolds in alternating chapters, first from Jodi’s point of view, then Todd’s. It is a deliciously dark tale, smarter, more layered and insightful than standard genre fare. (The one bump is a secondary plot involving Jodi’s two brothers that creates an unnecessary detour in the narrative.)

Harrison, a Toronto writer, died of cancer in April at age 65, before her remarkable debut novel reached bookshelves. Gratifyingly, she lived to see it sold in the U.S. and abroad. It must have given her great satisfaction to know she had created a novel that will be consumed greedily by a legion of mostly female readers for its satisfying theme: A woman who tolerates bad behaviour in silence finally takes her revenge.