Book Review: The start of the First World War 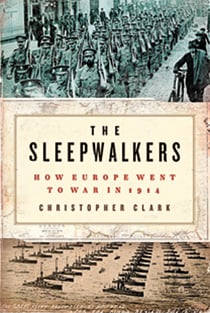 The Sleepwalkers: How Europe Went To War In 1914

The tone of the 20th century was set by the First World War, with all the ensuing misery, culminating in Hitler’s Holocaust, ongoing strife in the Middle East and the whole sordid tale of our times.

But how did the First World War itself begin? Most know it officially started in Sarajevo in the Balkans on June 14, 1914, with the assassination of the heir to the throne of Austria-Hungry, Franz Ferdinand, along with his wife, Sophie. Many know the assassin was only 19, a Bosnian Serb named Gavrilo Princip. Fewer know he was merely one of several young assassins who lay in wait on a prearranged route. The other would-be assassins chickened out, but not Princip. Can we blame this Serbian teenager for the hundreds of millions of souls who perished as the century played out? Had he missed, would the subsequent heaven on Earth that might have resulted serve as fodder for the ultimate alternate-history novel?

It’s doubtful. Clark—a modern European history professor—lays out the backstory in such a way that the First World War seems almost inevitable in retrospect. He begins a full decade earlier, with another royal double-murder in Belgrade. But the roots of the cataclysm go back further still: Clark traces the polarization of Europe and the shifting alliances of the great nations and future combatants that occurred between 1887 and 1907. Serbia counted on Russia’s protection should Austria avenge Ferdinand’s death, which in turn drew in Russia’s ally France and, reluctantly, England.

All of Europe was a powder keg and any number of seemingly minor skirmishes could have set the fuse. In the book’s conclusion, he draws parallels with the comparable complexity and potential catastrophe of the eurozone financial crisis of 2011-12, which was at its height just as he was finishing his early draft.