Book review: Clive Davis's 'The Soundtrack of My Life' 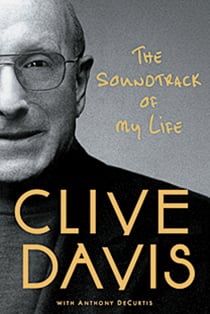 No one exemplifies the contradictions of modern pop music recording better than Clive Davis. A business of freewheeling, weird artists took its marching orders from straitlaced guys in suits—like Davis, a Harvard-educated lawyer who was installed as head of Columbia Records in 1966 because he was considered “unlikely to make rash or unnecessarily provocative moves.” Taking power at a time when popular music was changing irrevocably, Davis was able to sign and nurture many important artists, such as Bruce Springsteen and Aerosmith, because he lacked the preconceived bias against rock music that more musically trained executives had.

Because Davis already dealt with his Columbia years in his previous memoir, Clive: Inside the Record Business, this book starts to cover new ground only when he describes being fired from Columbia and beginning his new company, Arista Records, whose signature artists included Whitney Houston. But even with a personality as outsized as Houston, Davis is mostly the businessman, cataloguing deals and hit albums while trying to disavow too much knowledge of the things that destroyed her: “As close as I get to the artists I work with,” he writes, “I try not to get involved in their personal lives.”

Davis is less reticent about his own personal life, revealing that he discovered he was bisexual after his second divorce, in 1985. But though he makes a poignant case for tolerance and understanding, that hasn’t changed his hard-nosed attitude to his job: at times, he seems like a caricature of an executive who thinks artists are too inclined to follow their hearts. Many anecdotes are devoted to singers who rejected his advice and learned they were wrong—most famously Kelly Clarkson and her change-of-pace album My December. He writes, “I really didn’t know what to say to her when she told me that money wasn’t important to her,” adding, “as it happens, I have no choice but to care about money.” That may sum up his place in the music business as well as anything.