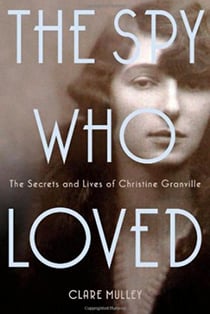 The Spy Who Loved: The Secrets And Lives Of Christine Granville

She was one of Britain’s bravest wartime agents—legend has it she was Winston Churchill’s “favourite spy”—yet Christine Granville’s feats of daring during the Second World War are matched by a personal story so flamboyant that James Bond creator Ian Fleming reportedly modelled double agent Vesper Lynd after her.

Born Krystyna Skarbek to a Polish count and his wealthy Jewish wife in 1908, she grew up disdaining authority and constantly pushing against societal conventions. By the time the Nazis invaded Poland in 1939, the former beauty queen was on her second husband, a diplomat. Soon working for Britain as a spy, she abandoned her spouse for an overlapping series of lovers, and skied into occupied Poland, setting up spy networks and escape routes for Polish and Allied troops. After stints in Budapest, Belgrade and the Middle East, she parachuted into occupied France a month after the Normandy invasion of 1944. There, as a courier, she survived on her skills as an agent and storyteller while travelling constantly in enemy territory. Once, after her boss and his allies had been sentenced to death (they were caught at a checkpoint with smuggled cigarettes), she pulled off an audacious bluff: Granville “walked straight into Gestapo headquarters and demanded the release of three captured British and French officers with nothing but her own bravado,” Mulley recounts.

Though her wartime exploits were so daring that she’d collect a raft of medals, it’s Mulley’s deft recounting of Granville’s almost fantastical personal story that transforms this biography into a dazzling tale. In an era that was marked by brutality and horror, Granville collected a fiercely loyal coterie of friends and lovers. So deep was their devotion that, as Mulley notes, many bestowed their daughters with the name Christine.