Book Review: The Stop: How the Fight for Good Food Transformed a Community and Inspired a Movement

By Nick Saul and Andrea Curtis 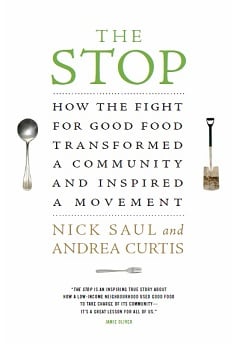 Food banks are a poor solution to hunger. Yet today close to 900,000 Canadians—a record high—rely on them each month. New measures include capping the number of client visits, underscoring the instability of the system. It’s a problem anti-poverty activist Nick Saul knows all too well. He’s the founder of the Stop Community Food Centre, an organization that began as a food bank in a poor Toronto neighbourhood and evolved over the past 15 years into a pioneering movement providing good meals alongside long-term solutions for people in need.

This anecdotal book follows the Stop’s imperfect, sometimes wrenching and ultimately inspiring history. Never preachy, it’s full of wisdom, empathy and smart, practical thinking: fundraising for a walk-in fridge to keep fresh vegetables at their peak is an early initiative. In keeping with the community focus, there are accounts of those who interact with the Stop. There’s a woman named Jane who declares herself “a drain on the system,” others who become members of its small staff and many more who together form a kind of urban village.

Saul himself is a political animal who engages the rich to support the poor through a two-tiered system that offers big-ticket fundraising dinners and an organic farmers’ market in an upscale neighbourhood while never losing sight of those who are “disenfranchised by a political system that often doesn’t benefit them.” He argues that “food bank systems end up treating food in the same way their corporate partners do: as strictly a commodity.”

Amid a glut of food manifestos and local-food edicts, this title stands out as an important contribution to the discussion around food and social justice. What’s more, its publication comes at a critical time: Saul and his crew are taking the model on the road with plans to make it a national movement.