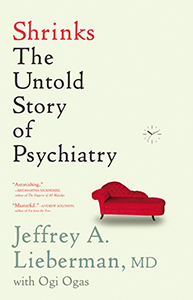 SHRINKS: THE UNTOLD STORY OF PSYCHIATRY

Mental illness, it was once thought, could be caused by an accretion of energy particles, called orgones, which were trapped inside the body. To treat the condition, Wilhelm Reich, an Austrian psychiatrist of some renown, would place his patient inside a wooden box, where the rogue elements could be caught and released with a surge of exhilaration (it’s no coincidence that “orgone” shares a root with “orgasm”). This theory was eventually debunked, and Dr. Reich—who, ironically, succumbed to paranoid delusions—was ultimately jailed. But his unconventional methods live on, alongside a host of other vivid examples, in this detailed account of the evolution of psychiatry.

A former president of the American Psychiatric Association (APA) and the chairman of psychiatry at Columbia University, Lieberman is acutely familiar with the misconceptions that plague both mental illness and the professionals who treat it. While he uses a handful of personal anecdotes to punctuate his narrative, Lieberman strives for a classical psychoanalyst’s state of emotional remove, allowing the facts of his research to propel the story forward—a deliberate choice, one suspects, for a man intent on dispelling any doubt that his chosen field is rooted in science.

Lieberman describes the horror of 18th -century asylums, “wretched, filthy, overcrowded dungeons” for the gravely disturbed, and Enlightenment-era reforms to the field. He lays out the rapid expansion of psychiatry in the 20th century, a period marked by the rise of Eastern European pioneers like Sigmund Freud, Carl Jung—and, yes, Wilhelm Reich—who brought their craft to the United States when they emigrated during and between the World Wars. Shrinks moves from the “headshrinkers” of silver-screen Hollywood to the advent of the Diagnostic and Statistical Manual, or DSM—founded on Second World War-era guidelines that determined whether prospective soldiers were draftable. And it covers the anti-psychiatry backlash of the ’60s and the great leaps in psychopharmacology that have all but defined our current era.

As a card-carrying representative of the psychiatric establishment, Lieberman has obvious biases. Though he does a fine job of outlining some of the unsavoury treatments prescribed by his early forebears, he seems loath to critique his contemporaries—a section on electro-convulsive therapy doesn’t acknowledge that the approach has often been imposed on unwilling patients. He talks about the fraught historic relationship between psychiatry and the gay community, but ignores issues over transgender politics that afflict it today. His history is also almost exclusively an American one. But Shrinks is a fascinating chronicle of our collective psychic—and psychiatric—demons, and how we’ve tried to exorcise them.