The strange science of war, as told by Mary Roach 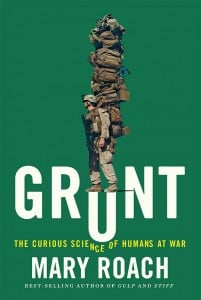 To say that Roach has an entirely predictable approach to the subjects she turns into compulsively readable bestsellers—the afterlife of human cadavers (Stiff) or adventures in the alimentary canal (Gulp)—is like saying Jon Stewart had a predictable approach to the daily news: mine it for unexpected and usually ironic absurdities. The science writer, a self-described “goober with a flashlight, stumbling into corners and crannies,” this time takes on the science of war. It’s not weapons, armaments or strategy that preoccupy Roach, but the type of research aimed at keeping fighters alive, “even if what people are being kept alive for is taking other lives.”

That sends her all over the military map. At the Natick Soldier Systems Center in Maryland, where the U.S. Army develops or tests everything from sandwiches that keep for three years to self-cleaning underwear, Roach learns all about Blast Boxers. They do not, as some early media claims suggested, prevent what are known as “life-altering” injuries to what soldiers keep within their underwear. (To have enough Kevlar layers for that, the boxers would be too heavy to wear.) But they are excellent at stopping bacteria-loaded dirt from making genital wounds far worse. Roach, in a later chapter that some readers might find too light-hearted by far, discusses breakthroughs in genital transplants.

In Djibouti, of all places, at one of those obscure military bases America maintains in more than half the nations on the globe, Roach encounters the Diarrhea Clinical Trial, and learns that U.S. military research into what used to kill up to seven times more soldiers than bullets may have saved as many lives as American soldiers took in the 20th century. (A 1978 Lancet article cited the rehydration work of U.S. Navy captain and doctor Robert Phillips as “potentially the most important medical advance this century.”) She plays a victim in a simulated explosion on a destroyer as medical corpsmen go through highly realistic training in San Diego, with actors “screaming and dying and bleeding like garden hoses.”

Roach winds up, more soberly than elsewhere in her book, at an Armed Forces Medical Examiner System morgue—the place where, after all the protection and care has inevitably failed, the dead arrive. Since 2004, when the practice began of autopsying everyone who dies in the service of the American military, some 6,000 bodies have passed through the system. All are examined to see if more could have been done better. Often the answer is yes: modern soldiers are so bulked up that standard-issue needles were not penetrating their pectorals when desperate medics wanted to relieve the air pressure in collapsed lungs. Feedback from the pathologists, recommending longer needles, has saved a lot of lives. Another medical advancement, Roach notes, in the murderous business of war.