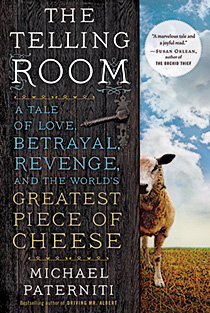 The Telling Room: A Tale Of Love, Betrayal, Revenge, And The World’s Greatest Piece Of Cheese

Paterniti is a gorgeous writer of sentences, with a delightful story to tell about a sharp Spanish cheese, though somehow The Telling Room falls short. This is not to say you won’t enjoy reading it. You probably will, and it must be among the most beautiful books about cheese ever written.

The “telling room” is the place in the Spanish home where bread is broken, wine decanted and stories told. It is where Paterniti is first enraptured by the tragic tale of a Castillian man named Ambrosio Molinos who miraculously resurrected an ancient family cheese recipe, won over the taste buds of the likes of the king of Spain and Fidel Castro, and then lost everything. The author saw in Molinos’s cheese—lovingly made, anchored in its community and tethered to a distant past—something far more than a food product and nothing less than the antidote to alienation from our mechanized and impersonal modernity.

Paterniti, an American globe-hopping journalist habituated to the “shrink-wrapped, digital madness of the modern world,” feels nostalgia for an authenticity and rootedness he has never known. He even temporarily moves his family to rural Spain, which regrettably occasions geysers of purple prose.

The book is peppered with digressive footnotes, often charming but also symptomatic of a work that cannot quite keep its narrative momentum. Paterniti falls in love with Molinos’s ideals, which results in a credulous hagiography for over two-thirds of the book.

It took Paterniti eight years of his life (and over 268 pages of his book) before interviewing the central supposed villain of his story. Oops. Though he writes a fine yarn about cheese, this book is really about storytelling, a subject upon which he goes positively meta. Paterniti writes exquisitely enough to keep the pages turning, but you may find yourself wishing for more showing, less telling.