REVIEW: A Thousand Lives: The Untold Story of Hope, Deception, and Survival at Jonestown 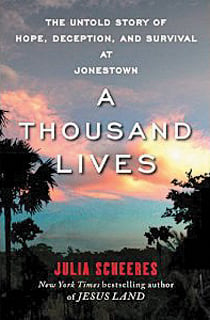 What if 9/11 is largely forgotten two decades from now? Won’t happen. Yet young people today rarely hear of the 1978 murder-suicide of more than 900 people, mostly Americans, at an agricultural colony in Guyana. Reverend Jim Jones’s mass killing of followers has dropped out of our consciousness of the 1970s for a multitude of regrettable reasons—the lack of a physical memorial being one, the political inconvenience of the incident surely being another. (Jonestown has, for example, been edited out of the myth of martyred San Francisco city supervisor Harvey Milk, who cynically protected Jones’s Peoples Temple in exchange for its votes.)

Mostly, the Jonestown deaths have been shifted into a foggy mental category of “cult suicide,” where degrees of culpability are imprecise. Scheeres’s account of the Peoples Temple and Jonestown, founded on new and overlooked FBI records, brings clarity. She tells the story through the testimony of five people, four of whom survived. The record left by Edith Roller, a left-wing English instructor who served as Jones’s official diarist, is perhaps the most poignant: Scheeres reads closely and decodes messages of despair that the teacher left between the lines as her messianic communist “Dad” grew crazier.

Scheeres’s aim is to help us see the valid, even praiseworthy reasons people joined the Temple, and to grasp how hard it was to escape the gulag that was Jonestown. Her absolution effort, however, is partly countered by her own reporting: no other writer has chronicled so forcefully how much help Jones had in engineering death. Doctors, lawyers, journalists and politicians all violated core rules of their callings for him. Focusing on innocents, Scheeres shows how effective Jones’s original anti-racist message of communal love was in its time. Now who will explain the motives of the thugs, concubines and informants who gave Jones power?

FILED UNDER: A Thousand Lives: The Untold Story of Hope and Survival at Jonestown deception jonestown Julia Scheeres