The anti-hero from a newspaper's basement

A review of 'The Transcriptionist' by Amy Rowland 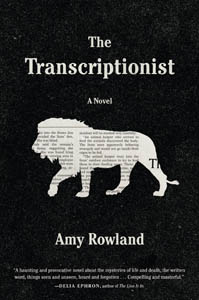 Rowland’s stint as a transcriptionist at the New York Times must have helped set the very real-feeling scenes in this novel where we meet her main character, Lena, at work in the basement of a venerable newspaper. “The room is the colour of old opossum or new pumice, the colour of newspaper without ink,” writes Rowland in this accomplished new literary debut.

Lena works alone all day, typing out the news stories called in by phone from glamorous journalists such as the tall and conceited Katheryn Keel, Baghdad war correspondent who talks to Lena on the phone like this: “A witness said he blacked out comma came to comma tried to move comma quote and a voice in my head told me not to look down stop end quote . . .”

Lena is both bored and disturbed by her job. She complains to the one male reporter who’s nice enough to her that she ends up sleeping with him: “I’m turning into a tape recorder. It’s frightening.” To pass the time, she reads the news. “In Mexico, a woman gave herself a C-section with a kitchen knife. Britain is running out of burial space.” Then a news item that raises more questions than it answers: A blind woman is devoured by lions at the Bronx Zoo, an apparent suicide.

Lena studies the grainy photograph of the dead woman’s face and realizes she’s the stranger who took her hand to comfort her the day she had a migraine on the bus. Why did the woman kill herself? The story doesn’t say. Lena’s quest to learn more leads her to pose as a reporter, interviewing the dead woman’s sister. Her transgression could cost her her job and perhaps this is why she reasons that, if she’s going to get fired, why not have it be for insubordinate behaviour? “I thought you were in New York,” Lena challenges Keel the next time the reporter calls in with a story, claiming she’s in Baghdad. “Look, I was in Baghdad, right? I just got this information so, obviously, I’m not going back to Baghdad to do a f–king toe touch for the dateline.”

Like all worthy anti-heroes, Lena is a good person who does questionable things sometimes, an anarchist who can’t help but stir up trouble. It feels right when she winds up fired and boyfriendless. She’s too ambitious to be used like a machine.