The trouble with austerity nostalgia

Owen Hatherley's book on why we keep calm and carry on with our fake, troubling nostalgia 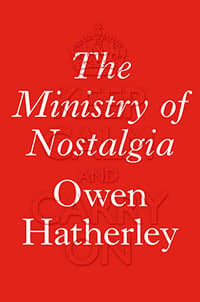 THE MINISTRY OF NOSTALGIA

“Nothing is too good for ordinary people.” Architect Berthold Lubetkin’s motto still carries an electric charge, which may be why it is so hard to buy this quote on a tea towel. “Keep calm and carry on,” on the other hand, sounds like the soporific for our time, and it can be found on everything from wallets to underwear, doormats to pillows. Created by the British government for use in the event of a German invasion during the Second World War, it had a renaissance during the financial collapse of 2008. It’s now, as Owen Hatherley writes, as recognizable an image as Rosie the Riveter, as iconic as Coca-Cola or Apple.

Hatherley’s book analyzes the contemporary appeal of this message, which he relates to a more general “austerity nostalgia,” a hazy yearning for postwar ethics and aesthetics now in vogue in Britain. He asks how it is possible to invoke an aesthetic developed in the 1940s, when the British welfare state was built, in the 2010s, when it is being destroyed.

Perhaps by forgetting the right things. Jamie Oliver’s Ministry of Food program, shops and book—a nod to the eponymous government department established 77 years ago to help citizens in an era of shortages—now corrects bad eating habits. Not for the rich, obviously; they can visit luxury supermarkets in London styled after ration cards. Meanwhile, real austerity is a few subway stops away—and it is ugly. If this is an expression of longing for the material world of social democracy it seems that British voters keep electing the wrong government.

The book combines analysis of the austerity nostalgia phenomenon with a parkour of film, art, graphic design, and especially architecture and urbanism, comparing romantic notions of wartime cohesion to the historical record. The “Keep calm” poster was designed by the Office of General Information, which did not use a single one, and faced criticism for its other designs. The Blitz spirit wasn’t classless, either: the government preferred private bomb shelters, since putting workers all together seemed risky. The picture is not of benevolent modernism emerging but rather of something brutally and ignorantly Victorian hanging on. But uncomfortable historical truths don’t sell inspirational dishware. Hatherley reminds us that the racist Empire and its repressions also belong to this period.

The postwar spirit is easily hijacked by those who did not experience it, and according to Hatherley this fake nostalgia disguises the fact that Britain’s new austerity is anti-egalitarian. He asks how is it possible that injustices like rocketing tuition, regressive taxation, and demands for higher productivity while taking on debt can be described as acts of civic virtue like helping a neighbour during the Blitz.

It’s telling that London is in the exact housing crisis that its public estates were created to solve. Rotting structures that are burdens to the public become desirable homes when sold to private developers.

But Hatherley finds that perhaps the greatest danger of austerity nostalgia is more subtle: it distorts our understanding of contemporary successes, the resilient communities that can’t be explained by the spirit of 1945 and whose stories of resistance, protest and direct action show that people are finding ways to economically and directly meet their needs. Nostalgia has nothing to do with them, and we should be wary of cozy histories and comforting slogans.