The true story of an American warlord: Book review 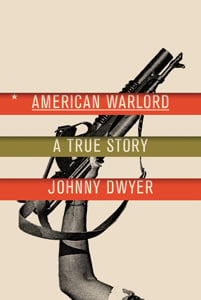 The media painted a scathing portrait of Charles Taylor: he was a Liberian warlord, a conniving tactician, and the first African leader convicted of international human rights violations. But he was also a father. Chucky Taylor might have seemed a footnote to his dad’s civil wars, but he was no less paranoid, narcissistic or sadistic.

When the elder Taylor ﬁnished a stint in Boston to go ignite Liberian revolution, he left behind a wife and son. She remarried and tried to shield Chucky from his biological father, but his seemingly genetic predisposition to crime—including run-ins with local cops—inevitably led him to West Africa. Hypnotized by supreme power in a poverty-stricken world, and innately drawn to impress his emotionally distant father, Chucky carved out a place for himself in Taylor’s government as the head of his father’s personal security detail.

Daddy issues underscore everything in Dwyer’s staunchly objective record: a rival general threatens Chucky’s position, child soldiers seek approval, and even Liberia itself suffers repeated identity crises, having been created and abandoned by Father America. (One United States government employee blithely summarizes Chucky’s security unit as “a bunch of people who had weapons in a country that nobody cared about.”) To demonstrate his strength, Chucky locked prisoners in small dirt holes filled with water and rotting corpses, laughed as his soldiers melted hot wax on captives’ genitals, and forced men to rape each other.

Chucky was the sort of immature, impetuous teenager no father would want, least of all a man clamouring for global respect. He sported bandanas and cornrows, and trained his fighters with mandatory screenings of Air Force One. “Taylor had dealt with disobedient soldiers, traitorous commanders, and double-crossing foreign governments,” Dwyer writes, “but the insouciance of his teenage son was a new challenge.”

American Warlord is required reading for human rights advocates, even if it occasionally tumbles into laborious minutiae. But it’s hard to fault Dwyer—a story this unbelievable is legitimized by every detail. When Chucky proposes to his 18-year-old Korean-American girlfriend, he hands her a pouch of uncut diamonds “emblematic of the dysfunction of the place and situation she found herself in.” Later, during Chucky’s nadir in Trinidad, he befuddles studio technicians there with violent hip-hop lyrics that he insists—to their universal disbelief—are autobiographical. Eventually, the horrific reality dawns on the Trinidadians, and us: “Oh, Jesus Christ. This fella tellin’ the truth the whole time.”