The Tucci Cookbook keeps it all in the family

The Italian-American family, that is 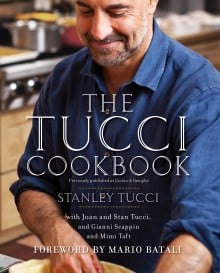 Do we really need another recipe-hawking celebrity?

Already we have Gwyneth Paltrow, Valerie Bertinelli, Eva Longoria and even Maya Anjelou.

Still, if the author is Stanley Tucci, then the answer is yes. The Tucci Cookbook, which hit shelves October 9, is as much an ode to Italian-American cooking, which deserves to be distinguished from the regional dishes of the motherland, as it is to family.

Both Tucci’s parents, Joan and Stan Sr., use the outset to explain their family’s passages from Calabria to the New World and the ways in which food factored large around their dinner tables. Gianni Scappin, the chef who Tucci shadowed in the days before Big Night–a film the actor co-wrote, directed and starred in–includes recipes developed for the film, like the timpano (see below for a refresher. And if you haven’t seen it, go and rent it — now!), and his own family’s food repertoire from the Veneto.

Tucci writes that, yes, just like his father, he believes his mother is the best cook in the world. Typical Italian son, I thought. But he continued: “I am all too aware of the cliché at work here: the eldest son of an Italian-American family saying, in essence, that no one cooks as well as his mother. But, in this case, it is not mere sentiment that leads me to this conclusion, but a sensitive and discerning palate.”

The recipes, most of which have no more than five or six ingredients, are the sort — at least for me — that you want to cook right away. Funny thing is, I don’t need a recipe to tell me how to roast potatoes with rosemary, or to sauté rapini. Nor do I need three recipes for basic tomato sauce, And yet I’ve dog-earred those pages. I’m not sure why.

Mario Batali writes in the forward that “Italian-Americans, like many immigrant populations in America, brought their food ideology to the New World, and in the best cases a hybrid was formed.” Perhaps more than any other ethnic cooking, Italian food has assimilated itself into our eating rituals all over the world.

I get a kick out of reading food histories that explain the migration of not only the five million Italians who arrived in the U.S. between 1880 and 1910–80 per cent of whom were from the South–but also how the recipes they brought were translated and adapted, often based on the ingredients available across the Atlantic, into new, wonderful things. It’s kind of like the telephone game, but with recipes.

But don’t expect chicken parmigiana sandwiches, penne alla vodka, shrimp scampi, muffuletta or pepperoni-topped pizza (That’s right, pepperoni is an American invention.)  These dishes fall more heavily on the old world way of doing things, than, say, the Soprano way. And there is a sense Tucci really does want to share these dishes: there’s a sincerity in the writing, and in the dishes, some of which are so humble and simple you wonder what the point was of writing them down.

But thank goodness the Tucci family thought to do so. Many of the recipes have been passed down through generations and haven’t changed in more than a hundred years — quite likely because they’re pretty much near perfect just the way they are.