The untold story of the Ritchie Boys

How German-Jewish refugees who fled the Nazis gathered military intelligence in Europe for the U.S. 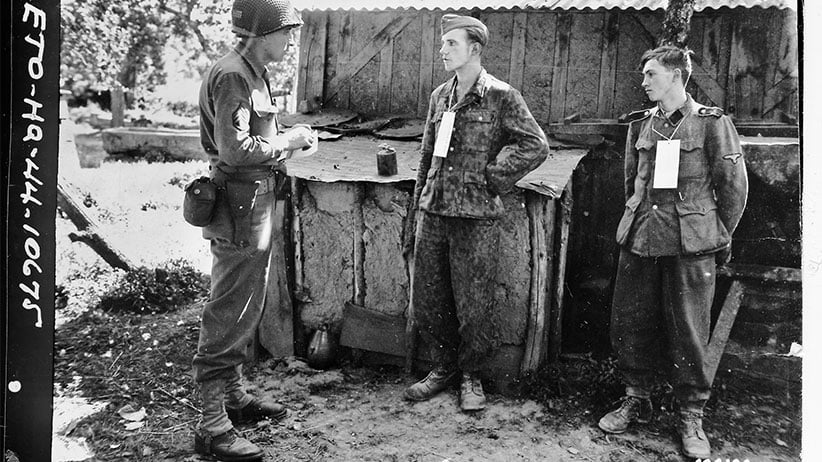 Martin Selling, 24, was undergoing training as a U.S. Army medical orderly in February 1943 and chafing under a Pentagon policy that kept him—a Jewish refugee from Germany and hence an “enemy alien”—away from any combat unit. He’d endured a lot already, including three brutal months in Dachau concentration camp after Kristallnacht in 1938, before finding haven in America. The knowledge that his adopted country would not let him fight their common enemy was bitterly frustrating. Then came the surprise transfer to secretive Camp Ritchie in backwoods Maryland, where his first sight was a platoon of soldiers marching by—in full-dress Wehrmacht uniforms. The U.S. Army had evidently decided that Martin Selling was a useful asset after all.

Bruce Henderson’s account of the Ritchie Boys, as the camp’s graduates came to be known, is full of arresting moments like Selling’s arrival, almost all of them virtually unknown. The “boys” were members of a military intelligence unit; strongly discouraged from talking about their war, they didn’t hold their first reunion until 60 years after it ended. “A few years ago,” says the Menlo Park, Calif., author of Sons and Soldiers, “I was reading an obit in the paper about a local man, a ninetysomething Jewish guy who had left Germany on the Kindertransport—his parents didn’t survive—made it to America and become a ‘Ritchie Boy.’ A what? I’m a military history writer and I’d never heard of them.”

What Henderson found when he looked into their history was that about 100 were still alive, half of them willing and able to talk—“not everyone has reliable 70-year-old memories”—about an extraordinary corner of the Second World War. The Ritchie Boys’ key asset was language skills, and the military’s hunger was for battlefield POW interrogators. Not all the boys were immigrants—future banker David Rockefeller and writer J.D. Salinger were among the camp grads—but 2,000 German-language refugees, almost all Jewish, were the prize pupils. “They spoke the same German as the Wehrmacht soldiers they were up against, they shared experiences, education and culture with them,” explains Henderson. And they were motivated like few other American soldiers.

As Nazi persecution of Jews intensified in the late 1930s, desperate families often found they could get only a single child out of Germany via the efforts of Jewish relief agencies. Most chose the eldest son, to carry on the family name. After Pearl Harbor brought America into the war, many of those sons were eager to return to Europe and find their families. It took dedication—the course at Camp Ritchie required polishing the English needed to communicate with their own side, combat training and intensive study of the German army—as well as courage and the thick skins they had already developed.

Even after the Pentagon’s change of heart about handing weapons to “enemy aliens,” suspicion of their bearing and accents remained widespread among regular American soldiers, sometimes reaching higher ranks. That was potentially lethal in Europe under fluid battlefield conditions, especially during the Battle of the Bulge, when the Wehrmacht infiltrated American lines with soldiers dressed in U.S. uniforms. The danger from the German side, of course, was far higher. Many Ritchie Boys took the precaution of anglicizing their names and altering their dog tags by replacing the “H” for Hebrew—a guide to their burial service should the worst happen—with “P” for Protestant. Two Ritchie Boys were identified as German-language interrogators working for the Americans after they were captured in a Nazi counterattack; revealed to be Jewish, the men were summarily executed.

The intelligence they gathered was coveted by higher command—a postwar Pentagon report ascribed more than half of the “credible” battlefield intelligence gathered in Europe to the Ritchie Boys. Sons and Soldiers concentrates on six of them, two dead—including Selling, who passed away at 86 in 2004—but who left detailed memoirs, and four still flourishing in their 90s. All had experienced harrowing escapes from Europe and dangerous but productive returns. They all became American success stories, businessmen or academics. Some never went back to Europe, but one retired to Berlin in 1988 and spent his final years visiting German schools to talk about his childhood under Hitler.

One or more of Henderson’s Ritchie Boys was present at every major moment of the American war in Europe: landing on Omaha Beach, speeding with Patton’s tanks, liberating concentration camps. But at war’s end, almost none found what they were really looking for—their families. Sometimes, not even information about their fate: it was the 1990s before Werner Angress could confirm his father perished in Auschwitz. But there were the odd grace notes among the wreckage of a continent. Angress followed up leads that took him to an Amsterdam address just five days after VE Day. His mother answered the door. “It was Sunday, May 13, 1945,” Henderson marvels. “Mother’s Day.”