Book review: The Value Of Violence 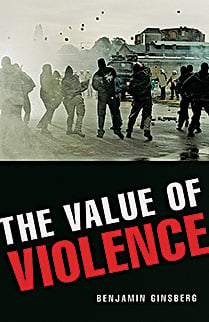 The Value Of Violence

A professor of political science at Johns Hopkins University, Ginsberg doesn’t want his readers ever to forget the truth summed up in a remark attributed—not altogether correctly—to George Orwell: “People sleep peacefully in their beds at night only because rough men stand ready to do violence on their behalf.” Not that Ginsberg, who cheerfully admits to cynicism, is any fan of the vast coercive power by which the modern state exerts what he calls “law-preserving violence”—ranging from, in his country’s case, the Pentagon to a prison bureaucracy indifferent to the fact that thousands of the two million inmates in its “care” are regularly sexually assaulted. And while the U.S. may champion regime change abroad, the author notes, Americans who want more political change than merely trading one group of politicians for another at election time (swapping, say, George Bush for Barack Obama) “should probably prepare themselves for serious discussions with the FBI.” State-initiated violence, though, is not what most people think of as political violence. Its opposite, “law-making violence”—meaning demonstrations, riots and revolution—is

the main, indeed sole, engine of real political change in human history, in the author’s opinion. By it, not just new individuals, but new classes, new social agents with new interests and modes of governance come into power; without violence, or at least the threat of violence, nothing ever really changes. Later generations, the beneficiaries of their ancestors’ political violence—here again, Ginsberg is particularly addressing his fellow citizens, heirs of the American Revolution and Civil War—should bear this history in mind.

Modern democracies have continually expanded the voting franchise, in Ginsberg’s opinion, to bring all possibility of political change within the system. But even as everyone has (theoretically) been brought into the electoral tent without, in the opinion of many voters, much political effect, governments have become more naked in their displays of power, in everything from harsher criminal punishments to electronic surveillance. Violence, Ginsberg believes, is not just inevitable and necessary, but valuable. And he doesn’t believe there will be any less of it in the foreseeable future. Quite the contrary, in fact.