REVIEW: The Verdict of Battle: The Law of Victory and the Making of Modern War 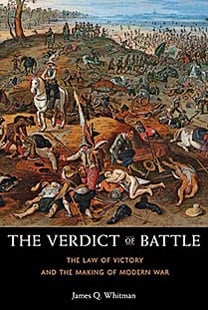 An eminent law professor at Yale, Whitman offers a provocative argument against the idea that modern Western laws and practices of war represent a vast improvement over earlier models. Eighteenth-century war, despite practices we now find repulsive—victorious troops would kill off enemy wounded and loot their corpses—was in many ways more civilized. A battle was a lawful means of settling a dispute (and gaining spoils), and its verdict was accepted by the losers. Now war has lost all legitimacy, and can only be undertaken in the direst circumstances of self-defence and/or fought for the loftiest of moral aims. The result is bloody conflicts that seemingly have no end, and a breakdown in the distinction between combatants and non-combatants. What modern war needs is more pragmatic dickering over the spoils of war—which tends to preserve both life and property—and fewer human-rights lawyers involved, Whitman writes: “Wars enter their most dangerous territory when they aim to remake the world, and the same is true of lawyers.”

The history Whitman provides is eye-opening. When battles really did decide the fate of nations, they were often observed by battle tourists. First Bull Run, the opening salvo of the American Civil War, brought out Washington society, accompanied by servants bearing picnic baskets. Henri Dunant famously founded the Red Cross because of the suffering he witnessed after the battle of Solferino in 1859, fought between a French-Italian alliance and the Austrian Empire. Yet Dunant, a Swiss neutral, was there partly as a tourist, to witness history in the making.

At Sedan in 1870, the tide began to turn. Prussia scored a decisive victory over France, and the French emperor laid his sword before the Prussian king. But the French refused their emperor’s surrender, and carried on the conflict. The struggle was no longer between king and emperor, or even between their armies, but between the German and French nations. The stage was set for the total wars of modern times, with their starvation blockades and aerial bombing campaigns, more deadly than battles.