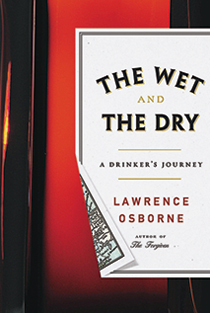 The Wet and the Dry: A Drinker’s Journey

Left to his own literary devices, the inveterate boozehound is a fountain of insight. Hemingway wrote everything half-cocked; Hunter Thompson, too. Bukowski’s work is pickled in whisky; Richler’s only slightly less so. The drunkard is an alluring figure: part sage and part clown, we admire his gumption while laughing at his shortcomings. It’s precisely why Lawrence Osborne is interesting. He is rooted to booze both by profession and habit, and in The Wet and the Dry he makes good on what sounds like the ultimate drunk-guy dare: drinking his way through Islam. The title refers to the contradictory nature of Lebanon, where booze flows freely in Beirut only to trickle off almost completely in the Islamic outskirts of the city. Alcohol, Osborne posits, is the “greatest threat” to radical Islam, as it was to Puritanism before—a bulwark against misogyny, misanthropy and a bedrock sense of sexless moral superiority that are the religious teetotaller’s stock-in-trade. The difference, of course, is that Puritanism is relegated to a few weird corners of the United States, while Islam . . . well, there are a lot of Islamic countries, whose tolerance for booze usually extends only as far as the thirsty tourists visiting their hotels. Yet, once ensconced, it is a powerful diplomatic force for good. “The concession to alcohol is the most surprising facet of this minuscule kingdom,” Osborne writes of Dubai. “It made the city more Western, more tolerant, more indistinguishable from occidental cities, as it was intended to do.” It’s a bit much, of course. Religious-based aversion to alcohol stems from the reality that booze can destroy lives; one need only read Osborne’s sketch of his own family to figure this out. But his central point—that neither the state nor religion has a place in my gin and tonic—is more valid today than in the heyday of the temperance movement.