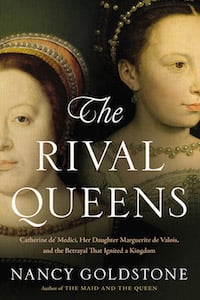 Not imbued with motherly instincts, the formidable Catherine de’ Medici, the widowed queen of Henry II, lived up to her Florentine family’s ruthless reputation: she would make and break treaties and promises if they could keep her in power and her sons—three would be king—on the throne. No wonder she kept 16th-century France under her thumb during an era of political and religious strife.

In her youngest child, Marguerite, however, she met her match. As Goldstone shows in a riveting new book, the beautiful, wilful and intelligent princess learned survival skills in the most elegant snakepit, the royal court at the Louvre. The conflicts between Marguerite, a woman of “courage and compassion,” and her mother, an “enthusiastic dissembler,” are the heart of this book.

Here’s one: Catherine forced the teenaged Marguerite, a devout Catholic, to marry her Protestant Huguenot cousin, King Henry of Navarre in 1572. A few days later, the calculating dowager launched the St. Bartholomew Day’s Massacre. Timed to entrap Protestant leaders in Paris for the nuptials, it was a bloodbath. Thousands were slaughtered in their homes, streets and even royal palaces. Marguerite’s husband avoided a similar fate only thanks to Marguerite, who refused to abandon him by acceding to her mother’s demand for a quick annulment, and by very publicly becoming a Catholic himself.

As queen of Navarre, Marguerite achieved a level of independence and influence that threw her into direct conflict with her mother, brothers and her husband, with whom she rarely shared a bed. In this book, lovers are killed, assassination attempts are thwarted, and Marguerite endures enough close escapes to fill a series of action thrillers.

The turmoil caught up with her, however. She spent 19 years holed up in a southern stronghold, the Chateau d’Usson, first imprisoned by her brother, Henry III, then, as strife enveloped France, choosing to remain within its relatively safe confines, writing her memoirs as the last of the Valois dynasty. After her husband inherited the French throne, she seized her chance to get in his good favour—she agreed to an annulment and was allowed to return to Paris, where she even set up house next to Henry and his new family. Marguerite didn’t have a fairy-tale life, but she did outlive all of her opponents, and she died loved by the populace. Which is more than could be said about her mother.