The greatest hockey player ever 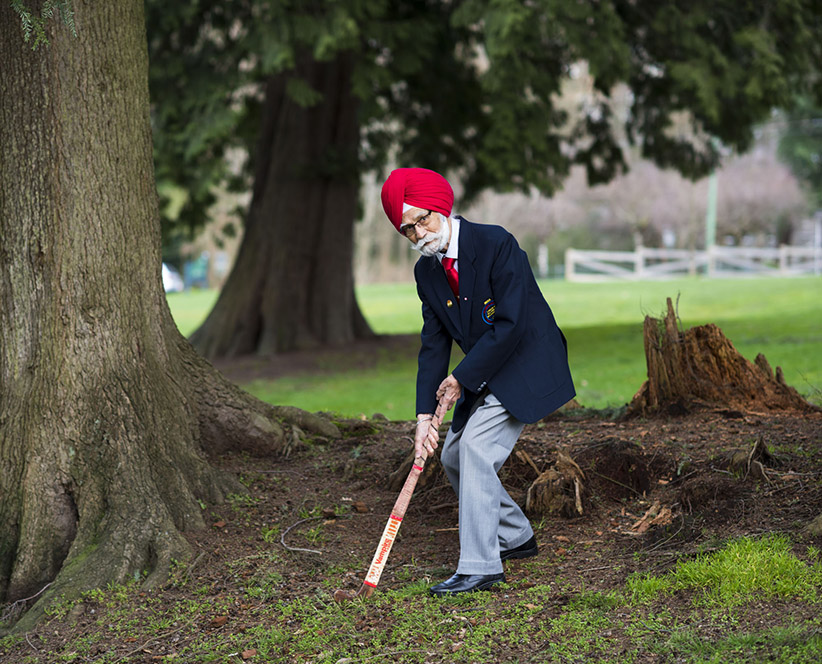 In the run-up to the 2012 Summer Games, the International Olympic Committee dialed up Balbir Singh Sr. with a flattering request. They wanted to borrow the baby-blue captain’s blazer he’d worn during the 1956 Olympics in Melbourne—scene of Singh Sr.’s third gold medal as a member of India’s once-invincible field hockey team. The win had been a crowning event in his newly independent country’s sporting history, and IOC curators saw the jacket as a perfect artifact for an exhibition they planned to stage in London during the Games.

Singh Sr., a proud member of the Olympic family, was happy to help, but there was a hitch: He’d donated the jacket decades earlier to the Sports Authority of India, and bureaucrats at the governing body were having trouble locating it. You’d think the blazer would qualify as a relic, along with the three dozen medals and a stack of historic photos Singh Sr. passed on to the authority in 1985. They represented the halcyon days of Indian field hockey, after all, and on paper, Singh Sr. was the game’s Gordie Howe—a living legend whose on-field performances live on in record books and bits of grainy film.

But a desultory round of rummaging by officials failed to turn up the blazer, while access to information requests filed by his family pointed to a galling conclusion: the jacket had been lost, or possibly stolen, along with the rest of Singh Sr.’s memorabilia. Only now had anyone noticed.

Singh Sr. was upset. “I donated these items to inspire the younger generations,” the still-spry 91-year-old told Maclean’s in February of 2016. But he was far from surprised. The loss of his souvenirs counts in a series of oversights, omissions and outright snubs by his birth country that have arguably made Singh Sr. the world’s most underappreciated sports legend. Field hockey is second only to cricket among the passions of Indian sports fans. But as a Sikh star amid an increasingly prideful Hindu majority, he’s been all but airbrushed from India’s collective memory, eclipsed by athletes who adhere to the country’s dominant religion. His childhood hero Dhyan Chand, a Hindu centre forward who played during the British Raj, is widely celebrated as the country’s greatest-ever athlete. He’s had stadiums named, statues erected and national sports awards titled in his honour. But as B.C. author Patrick Blennerhassett writes in A Forgotten Legend, a 2016 book about Singh Sr., Chand’s numbers were inflated because he playing alongside Pakistani and British-Indian stars prior to India’s partition.

Singh Sr., meanwhile, lives with his son and daughter-in-law in a modest townhouse in Burnaby, B.C., unrecognized by passersby when he walks the family dog. Now a Canadian citizen, he returns to India for a few months each year, staying with extended family in the northern city of Chandigarh. There, too, he roams the streets in relative anonymity, his snow-white beard and red turban familiar only to close friends and relatives. “I’m better known and recognized abroad by international fans,” he says matter-of-factly, “than I am by Indians.”

Blennerhassett hopes to change that. In 2014, the Vancouver-based journalist travelled to Chandigarh to meet Singh Sr, thinking he’d write a magazine story about him, but soon got wrapped up in what he viewed as a historic injustice. “Not once did somebody come up and say, ‘Oh, are you Balbir Singh Sr.?’ If you were walking around any country with any of its iconic athletes, you’d be mobbed. Wayne Gretzky in Canada. Pelé in Brazil. These people have been instantly recognizable. Balbir’s not, and just seeing that made me think that this was an issue.”

Blennerhassett’s argument for Singh Sr.’s primacy boils down to the relative competitiveness of postwar hockey. When Chand played, he argues, the British Raj had virtually no competition, so his 40 goals in Olympic play must be discounted when considered against Singh Sr.’s 22. Much has been made, too, of India’s triumph over Nazi Germany in the 1936 Olympic final—the last of three gold medals to which Chand led his team. But the 8-1 shellacking typified the lopsided scores racked up by a team stacked with the best Hindu, Muslim and Sikh players living under British rule.

Only after Indian independence and partition in 1947 did real competition emerge. Pakistan and Britain formed formidable sides of their own, while the Netherlands, Germany and Australia renewed their interest in the sport. As a result, the international hockey scene Singh Sr. entered in the late 1940s was much tougher than that faced by his idol. What’s more, within India’s Hindu-led field hockey system, he was vulnerable to internal politics and cronyism. At the 1948 Summer Games in London, for instance, he scored six goals in a preliminary-round game, only to be scratched from the next two matches for players with better social connections. His Games were saved by a group of Indian medical students from the University of Oxford, who complained about Singh Sr.’s absence to their country’s high commissioner in London. Pencilled in for the final against Great Britain, he scored twice in a 4-0 win.

It doesn’t get much more symbolic. India had won its first gold medal as a sovereign country against its former colonial master, marvels Singh Sr. “And we did it in our former master’s home.” Singh Sr., meanwhile, had demonstrated his capacity for big-game dramatics. Four years later in Helsinki, he scored five times in India’s 6-1 gold-medal victory over the Netherlands, setting a record for goals in an Olympic final that stands to this day. In 1956, he played the final in Melbourne with a broken finger, a character performance that helped squeeze out a 2-1 win over Germany.

Singh Sr. went on manage India’s national men’s team, winning a World Cup title in 1975. But his achievements were soon overshadowed by waves of religious violence that engulfed India, culminating in the 1984 military assault on the Sikh Golden Temple in Amritsar, and the retaliatory assassination of prime minister Indira Gandhi. In the early 1980s, he followed his three sons to Canada, where he made a part-time home, and the snubs have piled up ever since. Organizers of the 2010 Commonwealth Games in Delhi left him out of their ceremonies, hastily sending standard event tickets after his family members brought the omission to their attention. Media lists of greatest-ever hockey players routinely leave him out. On a couple of occasions, major Indian newspapers have misidentified him in photo captions.

To Blennerhassett, this is not so much a case of explicit discrimination as unacknowledged bias, which he says has deepened as religion has exerted itself in Indian politics. The subtitle of his book, Balbir Singh Sr., Triple Olympic Gold & Modi’s New India, refers to Prime Minister Narendra Modi, leader of the Hindu nationalist BJP, who has sought to portray India’s religious majority as tolerant. Blennerhassett has his doubts. “If you ask whether the marginalizing of Singh Sr. is a religious thing,” he says, “most Indians will flatly deny it and get angry at you. For a journalist, that seems a sure sign they’re either not telling the truth or trying to hide something.”

The sad thing is, if the government wished to rise above religious chauvinism, it could find no better unifying symbol than Singh Sr. Throughout his life, he’s had little interest in religious sectarianism or caste politics. In 1984, while attending a match at the Summer Games in Los Angeles, the aging legend grabbed an Indian flag from a Sikh protester who was tearing it to pieces. “He’s a Sikh by birth and a secularist and a nationalist by choice,” explains Ringo Dosanjh, the son with whom Singh Sr. now lives. “He believes in equality of all people. They could leverage him, politically, and he could become an international spokesperson for Indian sports.”

At least part of that message might finally be getting through, thanks to his family’s efforts to restore his profile. In the summer of 2014, Modi’s newly appointed sports minister, Sarbananda Sonowal, dropped by Singh Sr.’s home in Chandigarh to apologize over the missing artifacts, touching the elder’s feet in a gesture of respect. Then, two weeks ago, the Sports Authority granted Singh Sr. a lifetime achievement award. Singh Sr. was delighted enough by the honour to overlook the scant mention it received in the Indian press, and to ignore the fact the award itself is named after Dhyan Chand. By now, he’s used to such things.