REVIEW: Banzai Babe Ruth: Baseball, Espionage, and Assassination During the 1934 Tour of Japan 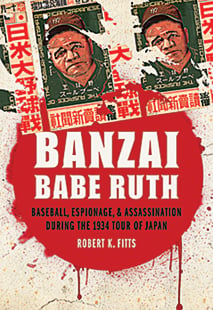 In 1944, Americans heard Japanese soldiers shouting, “To hell with Babe Ruth!” Ten years earlier, Ruth had been the toast of Japan when he and other ballplayers made a tour of the country. Fitts, an expert on the history of Japanese baseball, tells the story of a goodwill tour that didn’t create long-term goodwill. All was well for the players: the Americans admired the Japanese dedication to the game (Lou Gehrig said, “I wouldn’t be a bit surprised if our chief rivals in baseball would be the Japanese”), and the Japanese studied American baseball techniques. But among non-players, anti-Americanism was brewing: the man who brought the Americans over, newspaper publisher Matsutaro Shoriki, was stabbed by a right-wing nationalist.

The sense of impending doom casts a gloomy shadow over the fun and games. One of the tragic characters is Eiji Sawamura, a pitcher who astonished the world by keeping the American all-stars scoreless for most of a game, and turned down a subsequent offer to play in America. The game turned Sawamura into “a symbol of Imperial Japan,” but in 1944 he would be killed in the war “by the creators of the game he loved.”

Fitts also tries to sort out history, particularly the question of why the intellectual, multilingual catcher Moe Berg was secretly filming Japanese sites. Fitts thinks Berg did it for fun, rather than for his government, but that it “sowed the seeds for his future career as a spy” during the Second World War, a job he was better at than baseball. But Ruth, according to Fitts, bought his own hype, and was “convinced that his visit to Japan had sealed the friendship between the two countries and forestalled any possible war.” It turned out baseball is just a game, and it’s dangerous to think it matters more than it does.