REVIEW: There Was a Country: A Personal History of Biafra 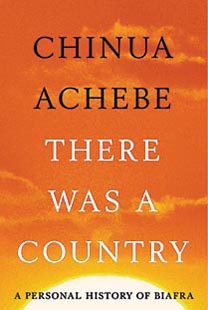 In theory, this is a memoir, but the real subject is Nigeria, with Achebe as a bit player in a catastrophe. Students of Things Fall Apart, Achebe’s first and most famous novel about a village being dragged into modernity by colonialism and missionaries, will be interested in his reflections on a bifurcated childhood. He was a devout and studious Christian who earned the nickname “dictionary”—for his command of English, the language of the colonizer. But when his parents weren’t watching, Achebe would sneak off at night to receive an “alternative education” about his native Igbo culture. Still, Achebe had enough blind faith in Britain and its institutions to send the only manuscript of his first book by post to a London publisher, where it nearly got lost. He became one of Africa’s most celebrated writers, but it wasn’t long before he was drawn into a war.

Achebe devotes most of his memoir to the brutal secessionist conflict in Biafra between 1967 and 1970. He fled ethnic cleansing in Nigeria’s capital for his Biafran homeland and soon became an international envoy for the beleaguered cause. He leveraged his status as a cultural icon to gather support for the breakaway state. Discussing his novels with world leaders, he would slip them letters about the deteriorating humanitarian catastrophe in Biafra, where millions, mostly children, would eventually die. The war comes literally to Achebe’s doorstep, with the Biafran army setting up artillery positions on the hilltop of his ancestral home.

Achebe laments much else in Nigeria. He is disillusioned enough about post-independence history to commend the British for governing “their colony . . . with considerable care.” Never mind, as he notes, that Brits rigged Nigeria’s first elections and sold the warplanes that bombed Biafrans. Achebe, ever the engaged intellectual, concludes with an appeal for political and electoral reforms. He would write Nigeria’s future if he could.