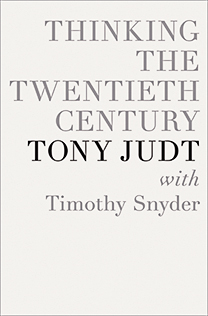 On Thursday mornings through most of 2009, historian Timothy Snyder visited his dying friend, fellow historian Tony Judt, and recorded the conversations that ensued. The result is this history of 20th-century political ideas in Europe and America. It is a book that could be written, or rather spoken, by few other than Judt and Snyder. Authors of brilliant books on European history,they have areas of expertise that overlap and complement each other: Synder has conducted extensive research in Eastern Europe and speaks many of the region’s languages; Judt has deeper knowledge of Western Europe, and especially Britain and France. Snyder’s role is primarily that of interrogator; the bulk of the text comes from Judt.

The prose wanders, but at its best, the book is a probing analysis of many of the dominant intellectual trends that shaped the last century and whose effects continue: fascism, Communism, socialism, liberalism, Zionism, and social democracy. It is enhanced by Judt’s discussions of his own rich life, which ended too soon with his death in 2010 from Lou Gehrig’s disease.

The breadth of Judt’s knowledge, his power of recollection, and his ability to draw insights from these are staggering though not flawless. He repeats the popular myth, for example, that those British who volunteered to fight for the Spanish Republic in the 1930s were typically young and upper middle class. They were in fact mostly workers.

The jabs he throws at his intellectual opponents are entertaining. Those against one of his ex-wives seem petty. We learn she resented listening to Judt and his colleagues’ late-night multilingual philosophical discussions and would rather have gone home to “read Newsweek in bed and chew pumpkin seeds.” It’s hard to know why the reader should care, though during some of the book’s more meandering passages one begins to sympathize with her. Not enough, however, to stop reading. Snyder says this book is about “the mindful life.” Judt lived one, and it is well reflected here.