Surprisingly, the biggest threat to Kate Harris and her cycling partner was traffic—not bad weather or bad people 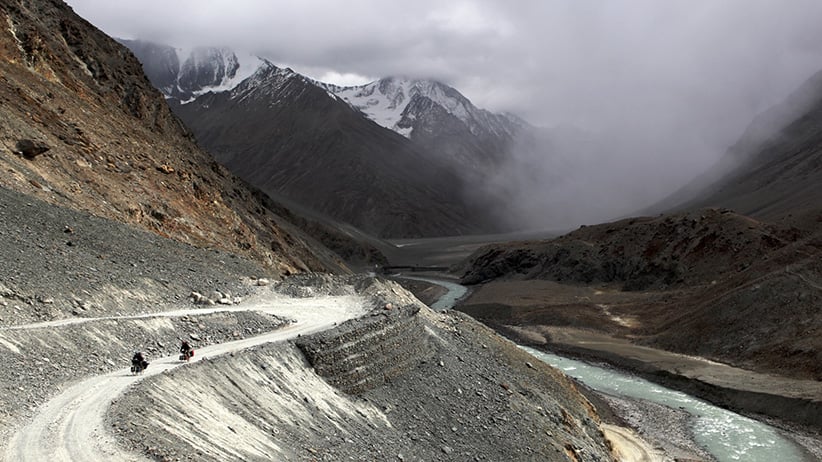 Growing up in small-town Ontario, Kate Harris was entranced by the exploits of long-ago explorers—Marco Polo was her idol—and crushed by the knowledge that just about every square inch of the planet had already been mapped. Unlike most starstruck kids, though, Harris decided she wouldn’t let that stop her: she would become a scientist and go to Mars. But events eventually conspired to change that ambition for Harris. Mars Exploration camp made it clear that touch, feel and interacting with wondrous new environments were non-starters when it came to space travel, while post-grad work at Oxford in the philosophy of science opened her eyes to the darker chapters in the history of science and exploration. Add an intensely experienced bicycle trip with childhood friend Mel Yule along a small section of the Silk Road, the ancient trading route that linked China and the Mediterranean, and Harris became convinced that exploration wasn’t what she thought it was.

Even so, what exploration actually was or could be wasn’t entirely clear to her before she and Yule returned to the Silk Road in 2011. This time, as Harris details in Lands of Lost Borders, a compelling, at times mesmerizing, memoir of a journey that was as much interior as exterior, the women were determined to bike the 10,000-kilometre road from beginning to end, including an unauthorized traversing of Tibet.

Q: There is a lot of pedalling through deserts and up and down insanely steep mountain peaks in your book. As it opens, you seem more interested in the geography than the people you might meet.

A: My sort-of mission when I set off down the Silk Road was to get to know the places in between, the unpeopled landscapes that connected the trading hubs. But those spaces are not really unpeopled at all, and certainly not empty of life. The highlights of our trip ended up beyond the natural beauty of the wild places and turned into encounters with people. The journey, and I hope the book, came alive with those encounters: brief glimpses into so many different lives and ways of living. I didn’t exactly set out with misanthropic intentions, but people weren’t my focus until they won me over.

Q: For all the cultural differences you experienced over the long road, they were all cultures of hospitality. With almost everyone you had expectations after a while that people would take you in when you needed it most.

A: Yeah, although that’s a dangerous attitude to adopt and one I’m not proud of. But we did get used to just incredible offers of hospitality, so many that we would be turning people down, especially in Turkey. And you come to rely on them even though that offer is a gift every time, and you should receive it as such and never expect it. The Silk Road is a pretty beaten path, has been for thousands of years, but we were really off the beaten season, so to speak. We went through Turkey in January and February along the Black Sea coast, which is not advisable or pleasant. People in Turkey probably opened their hearts and homes much more because of our vulnerability, our very clear suffering here.

Q: The worries you express are practical and mundane, in the sense of, “Can we make it up this mountain, will my much-patched tire last until the next town, will the proper entry permits come through?” Did you ever feel in any other way unsafe or insecure?

A: Traffic. I was afraid almost every day about getting hit by a car. When we tell people about our trip, they focus on sneaking across Tibet or skirting the border of Afghanistan for a thousand kilometres, when the real threat was much more prosaic—cars. Which is partly why we veered off the main highways onto back roads and into borderlands, to get away from traffic. As far as people went, it’s always a gamble. Everywhere you meet good people and bad people, whether in Uzbekistan or on the University of Toronto T campus. So there’s certainly an element of luck in that. We were really careful to accept hospitality mostly from women or families. The one truly worrying encounter we had was in Uzbekistan when we needed water and ended up in a room full of male truck drivers swigging vodka. It was extremely uncomfortable and we fled pretty fast.

Q: During your time at Oxford you found yourself more interested in the ideas spawned by science—and the science various ideas spawned—than the prospect of actually doing science. That changed a lot of things for you, didn’t it?

A: Oxford was an awakening to who I was and how I wanted to explore this world. I went there very fixated on science, and then began to wonder if I was really meant to be an astronaut or work in a lab. For two years I did nothing but read and write and wander in libraries. It was exhilarating and freeing and I loved it.

Q: And you began to have some doubt about your former icons, like Polo and Darwin?

Q: It was their practical aims that bothered you, the desire to turn a profit, or even to establish a scientific law?

A: Yeah, yeah. Exploration as it’s been historically framed versus whatever it was I sought. There’s an impulse to explore, I realized, and then there’s the expression, which finds different forms depending on what opportunities are available in a certain era. Polo left his home on a gruelling journey and spent years in a foreign land for profit, and other explorers were essentially patrons of empire, of colonialism. Yet we probably all share the same impulse: curiosity about the world, a sense of wonder.

Q: There are always mixed motives. You had funding from various sources for your trips and you needed to deliver something for your funders, whether a Polo-esque pile of rubies or just some information.

A: It’s true. You’re advertising for brands, you’re promoting companies, because there are not many other ways to make it viable. There’s going to be some compromise somewhere, some singing for your supper. That’s why I began to really admire writers as bona fide explorers not in pursuit of gain. You don’t sit down to write a poem with the expectation you might make money. True explorers are those who go deep into themselves as well as deep into the world and deep into literature and art to give expression to something new. Exploration, I now think, is best seen as an extension of consciousness, not territory. New lands should make us think in new ways or wonder how we can frame our questions in new ways. That’s the work of writers, of artists.

Q: I think you’ve just explained the second of what you neatly summarize as the three fears of travel: the fear you will be changed, the fear you won’t be, and the fear you’ll be run over by a transport truck, or as you put it less specifically, fear you won’t come back. But travel certainly changed you. You did some hard thinking before you left, and some of those thoughts crystallized into beliefs and some were discarded. For one, you have come to hate the word “wasteland.”

A: Sure, what we used to call places like wetlands, a lot of are still around because they were generally deemed useless. Spaces which were hard to build on, hard to develop. But that’s typical human blinkeredness, to look at a landscape like that and say it’s useless because it’s useless to our purposes and our ambitions, our greed. It’s not useless to the waters downstream that are filtered clean or to birds or frogs. We are just starting to make the shift we need to make, toward recognizing that rights of nature, the right of a river to exist, to have some legitimate standing in the world. People are pushing actively for this within legal systems. So many places along the Silk Road are illustrative of how we haven’t done that yet, and need to.

Q: Yet you see both sides of ecotourism, even the practice of maintaining a stock of wild animals for foreign trophy hunters because it encourages local conservation

A: I hope I did show the ambiguity of things where our black and white thinking tends to prevail. There’s a knee-jerk reaction to trophy hunting, which I share. My knee jerks too. But if you don’t look at things in their context—another beauty of travel is you see how context-specific things are—you keep coming up with sweeping silver-bullet solutions and ethical notions that might work in our society but not in other places. Then you are just setting yourself up for failure. I’m a strong proponent of the local is everything: look at context and go from there.

Q: And your dislike of borders, which was absolute—entering Tibet without permission was a feature, not a bug, of your journey—has softened too. Your book highlights a canyon on the border between Turkey and Armenia where bird life flourishes—because the border is so tense people aren’t allowed in. Rather like the DMZ between the Koreas.

A: Oh, yeah. We do need ways of organizing ourselves, and there are lots of borders in the natural world that are not as blunt and unbendable as ours. Part of why the Silk Road is so diverse in terms of culture is the natural separation along it, natural borders which created some isolation, even though trade was a through line for them. I am not whole cloth against borders.

A: Have you been travelling anywhere since the Silk Road?

Q: I have, two big expeditions since. In 2015 I went with two friends back to Tajikistan, to the borderlands where Afghanistan and China and Kyrgyzstan meet. In the book I describe how I just fell in love with that region in the summertime, when there is frost on the streams in the morning because it’s at such a high altitude. So I wanted to go back in the winter and see it all windswept, and because it’s easier to see animals like Marco Polo sheep when they move down lower on the mountainsides. And then once I finished the book and turned in the manuscript, the same two friends and I set off on a bike trip from Dawson City in Yukon to Tuktoyaktuk in the Northwest Territories. We left in March, so we were biking in minus 30 with headwinds. Part of the reason we wanted to make that trip last year was that it was the final year the ice road to Tuktoyaktuk was going to be maintained—we wanted to go to the end of the road in every possible sense. That was an amazing, brutal trip, from desk to Tuk, a really good way to shake off the book.