This is the new 'brain belt' 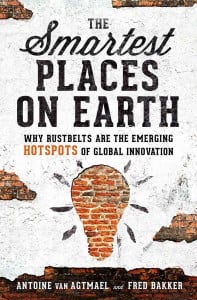 THE SMARTEST PLACES ON EARTH

Ask most people about rust belts and they will describe scenes of abandoned factory buildings and cars standing on cinder blocks between peeling houses. They might think of a city like Detroit, the tip of the midwestern American hurtin’ heartland of manufacturing that winds through Pennsylvania, West Virginia, Ohio, Indiana, and parts of Michigan and Illinois, ravaged by the outsourcing and offshoring of the 1980s and 1990s. But for the authors of this book, a financier and a journalist, this is a landscape of opportunity and innovation—the place new businesses and new business models grow.

After speaking to CEOs in dozens of countries, their conclusion is optimistic. They identify the energetic centres of a new, flexible third wave of Western manufacturing based on robotics, 3D printing, and Internet-connected devices. And they find these in cities like Albany, N.Y., Oulo in Finland, Eindhoven in the Netherlands, and Zurich—areas they term “brain belts,” where opportunity cost is low and basic research can be pooled among similar companies or done by a public university. These are the places where they think the greatest innovation is happening today. Sometimes they are classic rust-belt cities but mostly they are university or hospital towns in the vicinity: Waterloo, Ont., instead of Windsor.

They identify characteristics of such places: high-tech facilities, quality educational institutions, taxpayer support for research, appealing living conditions and, most important for them, cultures of free thinking, in contrast to the “hierarchical, regimented thinking so prevalent in Asian and MIST [Mexico, Indonesia, South Korea and Turkey] countries.”

We meet SUNY Polytechnic Institute head and physicist Alain Kaloyeros: “After narrowly escaping death several times in the strife-torn labyrinthine streets of Beirut, he abandoned the life of an urban guerrilla and turned to academia.” Kaloyeros convinced Intel, IBM, Nikon, Samsung, and other multinational competitors that their only chance for breakthroughs in silicon-wafer technology was working together under the collaborative umbrella of his university. The authors view “connectors” like him as essential to making the shift from rust belt to brain belt.

The bigger argument is that these brain belts give manufacturing in the developed world a second chance against emerging market countries (a term coined by van Agtmael, a World Bank economist). They argue that when superior products can be produced in North America and Europe and labour costs are almost the same (recent Bloomberg News research shows unit labour costs to be only four per cent higher in the U.S. than in China) then global manufacturing may be poised to change dramatically.