Review of The Rise and Fall of Great Powers 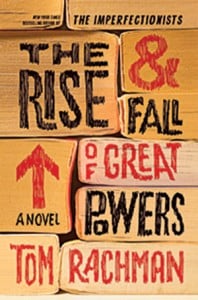 THE RISE AND FALL OF GREAT POWERS

Sometimes you welcome an outright thematic declaration—it synthesizes the thoughts—and we get one near the end of Tom Rachman’s elusive, hopscotching The Rise And Fall of Great Powers. “There aren’t places anymore,” proclaims a grifter named Venn. “No locations now, just individuals.” Then, a couple of pages later: “Remember all that nonsense about globalization—how the world was a village, how free-market democracy was going to unite the world? There are only individual operators, some pretending to belong to a group, others so naive that they really believe a group exists.”

It’s a manifesto in dialogue, illuminating this modern fable of people tied together by fraying, in some cases, illusory threads. Our protagonist is Tooly Zylberberg, a young woman raised among feckless wanderers whose interest in her she doesn’t understand—not, at least, until she’s pushing middle age. In a series of flashbacks, she recalls the adults who have drifted in and out of her life, including Sarah, a mesmerizing freeloader; Humphrey, a destitute Russian intellectual who provides her with an idiosyncratic education; and most importantly, the charismatic Venn, a child of B.C. hippies whose Prospero-like influence guides all of them (the name is a giveaway: diagrammatically, Venn sits at the centre of their interlocking orbits).

The characters ricochet from squat to squat, con game to con game, scouting out new victims from Bangkok to New York, united only by their rejection of moral bonds like family, community and country. Venn sets the tone, assuring them that all such conventions are a sham, cover for the privileged few who grow rich off the backs of the many. Digital communication, he observes, is erasing borders, negating social rules and upsetting hierarchies. So why pretend they exist?

The ziplessness is liberating. Yet the main players’ exhilaration is underlaid with yearning for the relationships they claim to eschew. Sarah aches for Venn’s approval; Humphrey loves Tooly as a child, and longs for her to stay close to him; Tooly is on a quest to find her mother and to understand why her emotionally detached father, Paul, apparently left her in the hands of strangers. While this book is not futuristic, it can safely be described as dystopian, because these secret wishes appear to be doomed in a world where not even transactions conducted with cold, hard cash produce trust. Still, it’s not spoiling things to reveal that eventually Rachman finds his way to a note of optimism, suggesting that maybe, just maybe, the emotional glue that binds humanity is re-forming even as it dissolves.

FILED UNDER: book reviews The Rise and Fall of Great Powers Tom Rachman