Book Review: Time No Longer: Americans After The American Century 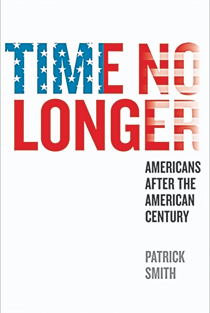 Time No Longer: Americans After The American Century
By Patrick Smith

A former newspaper bureau chief in Hong Kong and Tokyo, and a frequent contributor to the New York Times, Smith believes—as fervently as any American exceptionalist believes his country is a shining city on a hill, with a divine mission to the world—that his fellow Americans have to wake up from their mythologized dream that the U.S. is a country like no other. Americans are so drenched in their notion of just how different their nation is, Smith argues, how superior from its very founding—when a slave-owning future president penned, without apparent irony, that “all men are created equal”—that they barely notice their historical ignorance.

No other nation is so tactilely obsessed with its history, from recreated colonial towns to battles accurately re-enacted right down to the brass buttons on the uniforms—an embrace of extreme closeness that allows them to avoid any grappling with larger meaning. No other national legislature could have created an equivalent to Congress’s House Committee on Un-American Activities, and no other national leader could say, as president George W. Bush did shortly after 9/11, “History does not define us. We define it.”

The national commitment to myth has made them deluded, according to Smith, leading Americans into hubristic, murderous (for themselves and others) intrusions into other peoples’ histories. And then, when things go wrong, they abandon the cause, as well as any non-Americans who may have aided them, and begin to fret about decline, as if that was the only alternative to military action.

Smith’s take on the U.S. in the 20th century is cogently argued, and will resonate with foreigners. Americans, however, are not likely to take kindly to his prescriptions—far too collectivist for most—or his descriptions: cowardice as much as heroism dominated the American Century as the U.S. “flinched from genuine responsibilities at home and abroad and escaped into adventures that power alone made possible.” In the wake of 9/11 and two more tragic, pointless wars. Smith dares hope his countrymen will awaken. Perhaps they will, but only long enough to tar and feather him.

Visit the Maclean’s Bookmarked blog for news and reviews and all things literary.