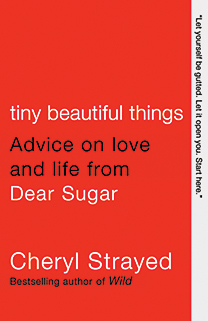 Who exactly reads advice columns? Presumably there are readers who’ve written in with their broken hearts and ethical conundrums, and then there are readers hoping to indulge in a little schadenfreude—“at least I’m not as screwed up as those people.” But if the column in question is “Dear Sugar,” penned by Portland, Ore., writer Cheryl Strayed for online magazine The Rumpus, the answer should be, frankly, everyone. This first collection of her columns elevates the workhorse format into compassionate essays looking at the lonesome frailty of modern life.

Ironically, given Strayed’s background, it seems like she should be the one asking for help. She freely shares the chilling details of her life: being molested by her grandfather, her part in the failure of her first marriage, dabbling with heroin. Strayed’s turning point was her 1,800-km solo trek down the Pacific Crest Trail in her 20s following the sudden death from cancer of her mother, a trip that was the subject of her memoir Wild, released earlier this year. (The bestseller has already been both optioned by Reese Witherspoon’s film company and chosen by Oprah Winfrey to relaunch her book club.) The personal revelations don’t come across as narcissistic. Rather, they let Strayed empathize, often humorously, with the pain and confusion of the people who write to her, from the person struggling not to stalk an ex on Facebook to the woman wondering how to broach the issue of her boyfriend borrowing her panties to the transgendered man considering reconnecting with his estranged parents. This ain’t your gran’s Dear Abby.

Nor is Strayed afraid to throw the occasional bucket of cold honesty. Her most moving responses are on the topic of love, and her advice to one woman in a tortured relationship is a question back: “How would your life be transformed if you chose to love this time with all your intelligence?” Truly words for all of us to live by.