The fight to save the Iraqis America left behind 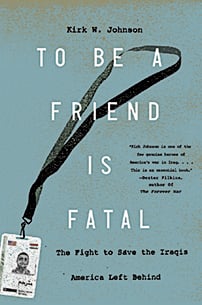 To Be A Friend Is Fatal: The Fight To Save The Iraqis America Left Behind

The morning after a neighbour recognized him leaving Baghdad’s “Green Zone,” the fortified enclave where the U.S. and its partners ran their occupation of Iraq, Yaghdan awoke to the sound of buzzing flies. He opened his front door to find the decapitated head of a small dog and a note: “We will cut off your heads, and throw them in the trash.”

Yaghdan was one of thousands of Iraqis who worked with international forces and aid organizations and was targeted as a result. Their share of the danger was often greater than that of their employers (they couldn’t spend nights in the Green Zone) and their protection less (“Do you have any idea how expensive these vests are?” a Green Zone security chief said when asked why Iraqis weren’t given body armour). And then they were abandoned.

The obstacles various U.S. government agencies threw up to prevent endangered Iraqis from finding sanctuary in America should be considered among the most shameful aspects of the Iraq war. This began under George W. Bush and continued, despite sanctimonious pledges to the contrary, during the presidency of Barack Obama.

Johnson engaged in a long and partially successful struggle to change this. Idealistic and fluent in Arab, he went to Iraq early in the war as a young employee of the United States Agency for International Development. “There was waste or fraud in nearly every project I looked at,” he writes. But a severe post-traumatic stress-induced accident cut short his time in Iraq. When Yaghdan, a friend and former colleague, contacted him asking for help, Johnson began to work on his behalf—and soon, on behalf of hundreds of others.

The story of Johnson’s efforts, which eventually resulted in the creation of the List Project, an NGO whose staff includes numerous pro-bono lawyers, is maddening, gracefully written and absolutely essential.

Johnson has helped some 1,500 U.S.-affiliated Iraqis reach America. Yaghdan, who moved in with Johnson’s parents, is one of them. Omar, a former forklift operator for the U.S. Army, was beheaded after almost a year of Kafkaesque requests from the State Department for information he had already provided, and that could be found anyway with a 90-second Google search. At Omar’s funeral, his brother received a text message warning he’d be next. Omar’s brother and widow are still in Iraq—hiding and waiting.